All is well in IEBC, assures Chebukati 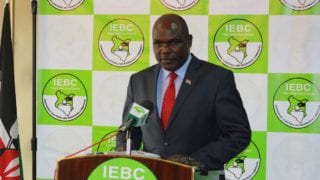 IEBC Chairman Wafula Chebukati has downplayed reports of a major rift in the electoral commission following his recent changes in the electoral body in which he sidelined the Chief Executive Officer Ezra Chiloba.

Speaking after the Commission’s closed-door meeting at Anniversary Towers, Nairobi, Chebukati said everything is under control even after the rifts that played out in the glare of the public following the leaked 12-point memo he penned to Chiloba.

The poll body chairman who had been holed up in a five-hour crisis meeting said the Commission is still deliberating on the procurement of ballot papers for the repeat presidential election slated for October 17.

Meanwhile, the Commission has indicated that the Supreme Court will now give directions on whether other presidential candidates will take part in the repeat presidential election other than President Uhuru Kenyatta and NASA’s Raila Odinga.