Almost half of this city’s population may have contracted COVID-19, survey finds 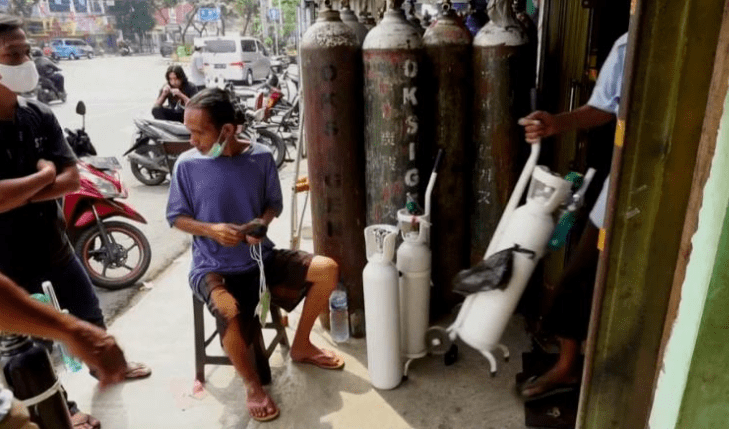 Nearly half of Jakarta’s residents may have contracted Covid-19, according to a health survey — more than 12 times the number of cases officially recorded in the Indonesian capital at the time when the research was carried out.

The survey, published July 10, tested for coronavirus antibodies in the blood of about 5,000 people across the city from March 15-31. The results showed 44.5% of those tested had antibodies, indicating they had been infected with Covid-19.

The report was a collaboration between the Jakarta Provincial Health Office, the University of Indonesia’s Faculty of Public Health, the Eijkman Institute for Molecular Biology and staff from the US Centers for Disease Control and Prevention (CDC) based in Indonesia.

Jakarta has a population of about 10.6 million, government figures show. According to the researchers, as many as 4.7 million people may have been infected in the capital by March 31.

“Through this survey, we can estimate the proportion of Jakarta residents who have been infected by the SARS CoV-2 virus, whether identified by PCR tests or not,” said Widyastuti, head of Jakarta’s Provincial Health Office, in an online press conference on July 10, state-run news agency Antara reported.

According to Indonesian Health Ministry data, Jakarta had recorded more than 382,000 cases of Covid-19 on March 31, when the survey ended. By Tuesday, that number had shot up to 689,243.

This uptick in the capital comes as Indonesia — the world’s fourth most populous nation — faces a dire stage in its battle with the pandemic, recording tens of thousands of daily cases and up to 1,000 deaths a day nationwide in one of Asia’s worst outbreaks.

Hospitals across the country, notably on the island of Java — where Jakarta is located — have been pushed to the brink by the spread of the highly infectious Delta variant, with several cities including the capital placed under partial lockdown.

Dr. Pandu Riono, an epidemiologist from the University of Indonesia’s school of public health, said the survey found some people are at higher risk than others, Antara reported.

“People in densely populated areas are more susceptible to being infected with Covid-19,” he said. “The higher the body mass index, the more infected, in this case [those who are] overweight and obese. People with high blood sugar levels are also more at risk.”

The report also found the highest number of antibodies in the 30-49 age group and that infection rates were higher in women.

The results fall in line with health experts’ fears that Indonesia’s Covid-19 crisis may be more severe than official numbers suggest, with the country initially slow to test and contact trace. At first, authorities did not realize how quickly the virus had been spreading in this latest wave, Health Minister Budi Gunadi Sadikin previously told CNN.

Scientists have found it’s likely that people recovering from coronavirus have some immunity — but it’s not clear how strong it is or how long it lasts.

Herd immunity is the idea that a disease will stop spreading once enough of a population becomes immune, however, the researchers were wary of attributing the high percentage of antibodies found in their survey to herd immunity.

“In an open city like Jakarta — which has high intra- and inter-region mobility — it is hard to achieve herd immunity,” the researchers said.

Jakarta should instead focus on vaccinating residents to build immunity to the virus, they added.

Indonesia has mostly relied on Sinovac in its national Covid-19 vaccination rollout that started in January. Concerns have been raised in recent weeks about the efficacy of the Chinese vaccine against more infectious variants after hundreds of health workers contracted the disease despite being vaccinated, with dozens hospitalized.

Health minister Budi said in a news briefing Friday that all health workers would receive a third shot of Moderna’s mRNA vaccine, Antara reported. The first shipments of the vaccine were sent to Indonesia from the United States over the weekend.

“We have agreed that the Moderna vaccine will be given as a third dose to provide maximum immunity to the existing viral mutations,” he said.