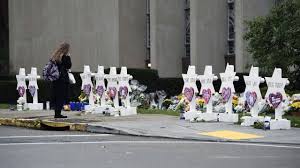 Termed as the deadliest attack on Jews in American history, the attack happened in October 2018 where 11 people were slaughtered inside the Tree of Life Synagogue in Pittsburgh.

This appears to have triggered a spike in anti-Semitic searches on Google, exclusive research by CNN.

Many people have typed hateful language into Google that it produced the most anti-Semitic searches seen in the last 12 months.

Our analysis did not include benign searches for information about the news but users seeking material for “Jews must die,” “kill Jews,” and “I hate Jews,” among others, all of which were searched at alarmingly higher rates than normal.

An increase in anti-Semitic Google searches was also found after the Passover shooting in Poway, California in April.
And as might be expected, postings on sites like 4 Chan and 8 Chan that have largely been co-opted by those with right views, also saw plenty of discussion about the attacks, though the content was more surprising as well as disturbing.
CNN commissioned the analysis from advocacy group HOPE Not Hate. They researched a sample of mainstream and fringe responses online for a year from May 2018 to last week to better understand how anti-Semitic views are shared and spread online, especially in the wake of the two synagogue attacks that struck fear into the hearts of American Jews.
The findings come days after the Anti-Defamation League (ADL) said anti-Semitic incidents in America rose for the third year in a row, hitting near-historic highs.
There are 1879 documented attacks against Jews and Jewish institutions across the country in 2018. Searching for “kill Jews” on Google yields stories about the Holocaust, but also specifics on how Nazis killed the Jews, and a plethora of stories of people who have made threats against Jews.
A search for the term “Jews must die” brings up stories about the Pittsburgh shooter, who allegedly shouted that before the shooting.
But Googling “I hate Jews” takes you to a variety of pages ranging from a Wikipedia entry about self-hating Jews to an article about a Vice co-founder, who left the company more than a decade ago, launching into a rant about Jews in a post titled “10 things I Hate About Jews.” Among the articles also are comments from President Donald Trump telling Republican donors that Democrats “hate Jewish people.”
As you dive deeper into the search results of Google, the articles become less mainstream and more offensive. More rants and anti-Semitic vitriol from white supremacist sites come up.
Google searches for “kill Jews” were also atypically high, reaching levels not seen since the Pittsburgh aftermath, in the wake of the Passover shooting that killed one woman and injured the rabbi and others, our research shows.
As a Jewish woman living in Washington, DC, who takes her two-year-old daughter to synagogue and writes for the Jewish news and culture Tablet magazine, the increasing violence is alarming and is impacting real life.
“It is a serious life or death threat for American Jews,” Pildis says. “I feel a sense of loss, for what it used to be like for Jews here.” It is personal, for her, like other Jews who feel under threat.
She says each assault on a Jew or vandalism of property with a swastika impacts her. And the massacres, well, they feel like a death in the family.