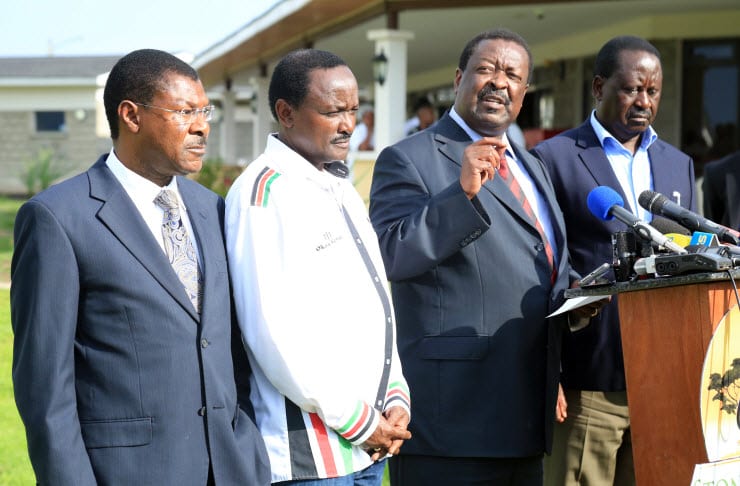 Amani National Congress (ANC) party leader Musalia Mudavadi has trashed the possibility of NASA principals working together in the coming elections saying the alliance is irredeemable.

Mudavadi, who was on a two-day Coastal tour to popularize his candidacy for president in next year’s general election, said NASA is functionally defunct citing betrayal from his co-principals.

“That ex…is he ready to work with me? Don’t try and create a narrative which is being spun,” said the ANC leader.

His assertions were strongly reiterated by ANC stalwart and Kakamega Senator Cleophas Malala.

Mudavadi said the storm of betrayal rocked the then chosen political boat of the principals leading to a vicious fallout when ODM leader Raila Odinga and his political nemesis President Uhuru Kenyatta ended their rivalry in the famed March 9, 2018 handshake.

“They don’t want to accept that there is a serious deficiency of trust in NASA,” he stated.

Former Speaker Kenneth Marende, who accompanied Mudavadi in his Coastal tour, weighed in on his support for the ANC leader’s presidential ambitions.

ODM leader Raila Odinga during the burial of former Kibwezi MP Kalembe Ndile on Friday indicated that he never broke ranks with his co-principals, and that it was likely they would work together again.

The handshake between President Kenyatta and Raila, after the contested 2017 presidential election, set off a chain of events that changed the political landscape in the country, causing rifts in the ruling Jubilee Party and within the NASA alliance that sought to dislodge it from power.