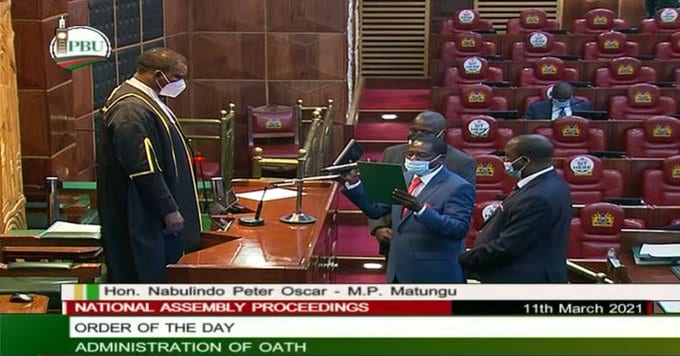 The newly elected MP for Matungu Constituency Peter Nabulindo has been sworn-in.

He took oath of office at the National Assembly on Thursday.

Nabulindo, who vied on an Amani National Congress (ANC) ticket, won the by-election that was held on March 4, 2021.

This follows the demise of MP Justus Murunga in November last year.

The family said the 60-year-old legislator had developed breathing complications.

Reports indicated that the MP had earlier been admitted to the Aga Khan Hospital in Kisumu where he was treated for diabetes and hypertension.

He had been recovering at his home until November 15 when he developed breathing difficulties.

The lawmaker collapsed as he was climbing the stairs.

He died while being rushed to St.Mary’s Hospital in Mumias.

The MP is survived by his widow Christabel Murunga and 8 children.

On November 19, 2020, a Nairobi Court temporarily halted the burial of the late MP pending the hearing of an application by Agnes Wangui who claims to have been his mistress.

In court papers seen by Citizen Digital, Ms Wangui claimed that she had two children with the first-time lawmaker.

Through her lawyer Danstan Omari, Ms Wangui told the court that the MP’s family excluded her from the burial plans.

She expressed concern that her children would be left out of their father’s estate and sought to have the family recognize her and the children.

A month later, a DNA test has revealed that the deceased sired of one of his mistress’s two children.

The burial was later given the go-ahead but the mistress was nowhere to be seen during the ceremony.