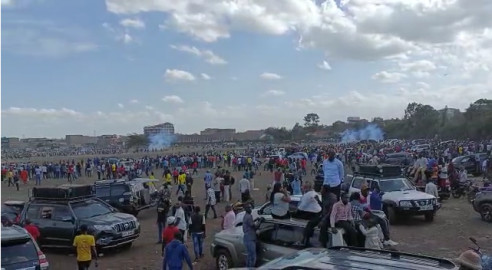 Deputy President William Ruto's Sunday rally at the Jacaranda Grounds in Pipeline, Nairobi was momentarily halted after a rival group opposed to the gathering raided the venue and started pelting attendees with stones.

Several videos showed police officers lobbing teargas to disperse the crowd that had gathered at the venue.

DP Ruto, while popularising his August presidential bid on the 'bottom-up approach’ to the area residents, said his government would do away with the culture of throwing stones once he is elected president.

Teargas was seen smoldering as the rally bore on, with scores of people in the audience fleeing from the dais where the second in command was.

In what appeared to be a thinly-veiled attack on his competitor, ODM leader Raila Odinga who recently claimed he would jail Kenya's corrupt, Ruto said he is beyond fear.