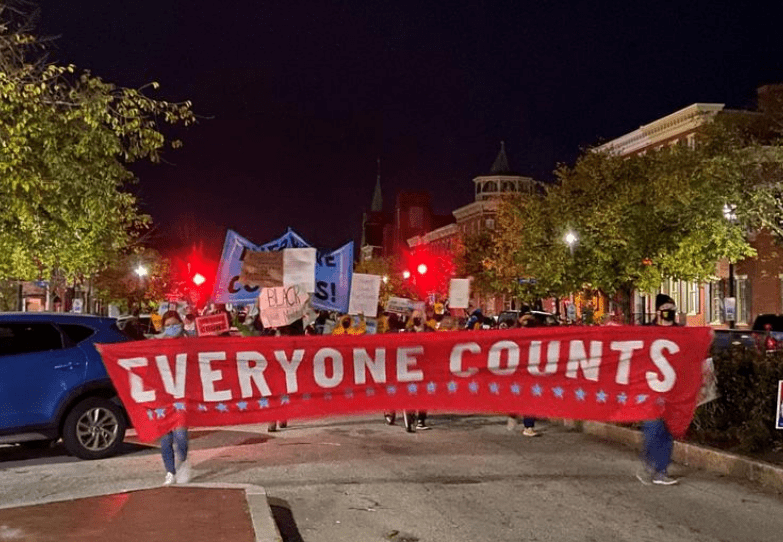 Weary from one of the most bruising U.S. presidential races in modern times, Republican and Democratic voters alike were in a state of high anxiety on Wednesday with the election outcome still unsettled a day after polls closed.

Biden supporters expressed heightened fears the Republican incumbent might not accept the election result if he were to lose. Many in Trump’s voter base, meanwhile, echoed his unsubstantiated allegations of widespread electoral tampering.

Anna Drallios, a Biden voter who immigrated to the United States from Albania in 1967, said Trump’s questioning the legitimacy of the normal election process while demanding a halt to the vote count had a familiar ring.

“I come from a communist country, and I know what it is like not to have the vote, not to have the voice,” said Drallios, one of a few hundred protesters who rallied in Harrisburg, the Pennsylvania capital, chanting, “Count our votes.”

“If we allow our votes to be stolen from us, we are heading toward dictatorship, toward oppression,” she said.

In Detroit, about 30 observers, mostly Republicans, were barred from entering a vote-counting hall by election officials who cited indoor capacity restrictions imposed to prevent spread of the coronavirus. Police were called to enforce the decision.

Many of those excluded stood outside the hall voicing their protest and singing “God Bless America” while a second group of Republican observers who were denied entry held a prayer circle nearby. They also broke into chants of “stop the vote” and “stop the count.”

The post-Election Day tension proved hard for many to bear. Some turned to caffeine or sought solace in chores and other distractions.

“It’s like the twilight zone,” said Tanya Wojciak, 39, who reckoned she had downed 17 cups of coffee and found herself pacing the floors of her home in Cortland, Ohio, as she watched results trickle in from battleground states deluged by record-breaking numbers of early mail-in ballots.

“Trump’s scary, premature declaration of victory has me unnerved,” said Wojciak, who said she voted for Biden even though she is a Republican.

Legal experts have said the election outcome could become bogged down in state-by-state litigation over a host of issues, including whether late-arriving ballots can be counted.

“It’s very important that we make sure that our democracy is maintained,” said Meira Harris, 26, a social work student. “This election has provoked so much anxiety.”

City police posted pictures on social media of debris fires in lower Manhattan that they said were set by protesters. They said at least 20 people were arrested, accused of blocking traffic, disorderly conduct and similar offenses.

The Protect the Results coalition, encompassing dozens of groups from Planned Parenthood to Republicans for the Rule of Law, had said it was organizing a day of mass protests in 500 cities. But those plans were put on hold late in the day.

U.S. officials said they have kept a wary eye on right-wing militias, worried that Trump’s allegations of ballot fraud could bring heavily armed groups out onto the streets. So far, they appeared to be keeping a low profile.

Enrique Tarrio, leader of the far-right men’s group Proud Boys, said he and three others were stabbed early on Wednesday blocks away from the White House. One of his alleged assailants wore a “Black Lives Matter” mask, he told Reuters.

Local police said they could not confirm that account and no arrests were immediately made. The Washington chapter of the anti-racism movement said on Twitter it had nothing to do with the alleged attack.

RETREAT FROM THE FRENZY

In Gibsonburg, Ohio, Tom Younker distracted himself from televised election coverage by tending to his tomato garden. A 74-year-old painting contractor who has served on the local board of elections for 34 years, Younker said he caught just a few hours of sleep after a late night tallying votes.

“It’s like an up-and-down see-saw,” said Younker, a Biden voter. “You think you’re going to win pretty big, then you see it tightening.”

In McConnellsburg, Pennsylvania, Stanley Kerlin, 66, a lawyer who voted for Trump, questioned the integrity of those tabulating many of the ballots in his state.

“Most of them are down in Philadelphia and you can’t trust those people any further than you can throw ‘em,” said Kerlin, a Pennsylvania Republican Party committee member. Still, he said Trump spoke too soon in claiming victory early on Wednesday.

Judy Mowery, 60, a Biden voter from Bethlehem, Pennsylvania, said she worried about violence between opposing political blocs regardless of the outcome.

“Even if Biden wins, which I think he may, we as a country have lost,” Mowery said. “We are even more divided than I thought.”