Are people paying Huduma Namba officials to get registered? 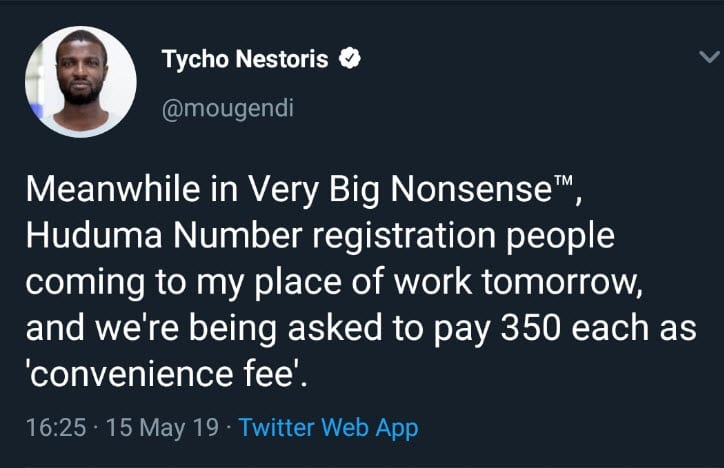 As the deadline for Huduma Namba fast approaches, Kenyans are rushing to beat the Saturday cut-off day for the mass registration.

Majority of registration centers across the country experienced long queues with people turning up as early as 5am to avoid the unknown consequences that hang over the heads of those who will not have registered.

“I have been on this queue for over three hours, their machines must be very slow because the queues are moving very slowly,” said one of the people on the queue at Tumaini registration center in Ongata Rongai.

There have been threats from different government officials saying those who will not have enrolled on the National Integrated Identity Management System (NIIMS) will not be offered essential government services.

However, the High Court allowed the roll out of Huduma Namba registration but ruled that the exercise is not mandatory and even warned the government against issuing deadlines for the collection of data.

The government has pledged to obey the court order but many people are still skeptical hence the last minute rush.

However, there are reports that people are having to pay the officials tasked with the registration to pitch tent at offices and residential areas.

Citizen Digital has been informed of people who have paid and had the Huduma Namba officials show up in their offices and homes where they proceeded to be registered.

In Nairobi, people confirmed that the officials were in their office and were asked to fork out between 350-700 which was branded as “convenience fee.”

For residential areas one told us that their neighbourhood paid Ksh.5,000 and the officials showed up and helped facilitate the process.

Twitter user Mougendi shared his shock on the social media platform saying the officials had asked for Ksh.350 each for the process to be brought to their office.

Meanwhile in Very Big Nonsense™️, Huduma Number registration people coming to my place of work tomorrow, and we're being asked to pay 350 each as 'convenience fee'.

An official who did not want to be named said “Huduma Namba is free, tipping is a choice” defending the process adding the fee is just for “convenience.”

Interior Cabinet Secretary Dr. Fred Matiang’i on Monday said the government will not extend the deadline for the Huduma Namba mass registration exercise but extended the registration time from 6am to 6pm.