Armyworms could lead to loss of 16 million bags of maize, PS warns 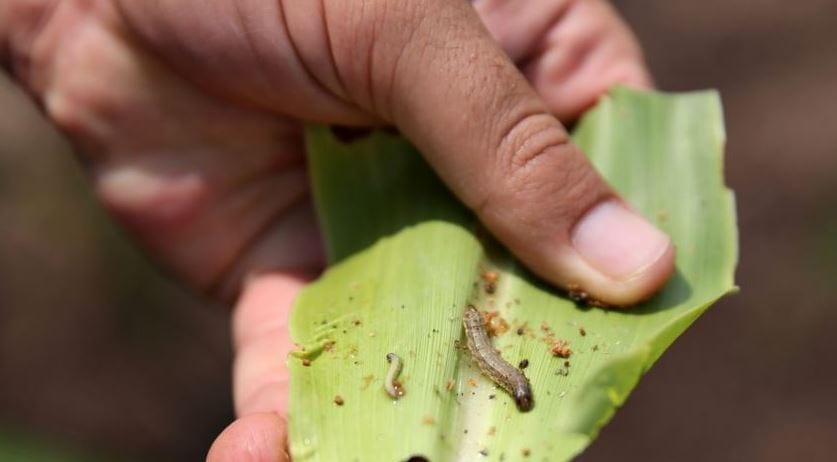 Speaking in Uasin Gishu while touring farms affected by the destructive pest, the PS says that more than 200, 000 acres of land across 25 maize growing areas have been infested by the armyworms.

Stating that this acreage accounts for 20% of the land under maize production in the country, Tuimur called for urgent action to mitigate the effects of the armyworm invasion.

“If we don’t take urgent measures we will lose close to 16 million bags of maize which amounts approximately to Ksh50 billion. That is why the government is now liaising with county governments to devise a means of solving the problem,” said the PS.

According to the PS, the government has already released a total of Ksh325 million to purchase pesticides and knapsack sprayers.

Farmers are, however, not convinced that this move will suffice.

“The pesticide that we normally use to combat the armyworms is not working now. We have sprayed our crops thrice now but they are not dying. They attack every variety of maize seed at all stages. We call upon the county government and national government to ensure that we get a new pesticide that is able to kill the pest,” lamented one of the maize farmers.

The fall armyworm is a pest which attacks more than 80 plant species, but in East Africa it mainly targets maize.

In recent months there have been increased reports of armyworm infestation across East Africa, leading agriculture experts to call for a joint approach to contain the pest.

Head of the crop production unit at the United Nation’s Food and Agriculture Organization in Kenya Wilson Rono, says that all agricultural stakeholders from the region need to come together to chart the way forward.

“It’s not going to be very useful for Kenya alone to control the pest, because it flies 100 kilometers per day, so it doesn’t know where is Uganda, where is Tanzania,” said Rono.

“Europe and Asia are not immune because these pests can move up north to Europe, to the Mediterranean countries, can move to Asia, through the Middle East and so on,” he added.

Vice president at the Alliance for a Green Revolution in Africa (AGRA), Joe DeVries, noted on May, 16 2017 that fall armyworms were first reported in Nigeria in January 2016, and have spread rapidly, with first case in Kenya being reported in March this year.
“We’re talking about a pest that literally just arrived this year in this region and is already causing major concern among farmers, partly because they’ve never seen it before and don’t know how to control it, and partly because of the damage that’s already occurred in their farms,” said DeVries.

Scientists say that fall armyworms can fly long distances, and females can lay up to 1,000 eggs at a time.

They multiply rapidly in tropical climates-making Africa the ideal place for them.

Experts are still doing a research to know how the pests, which are native to the Americas, got here in the first place.