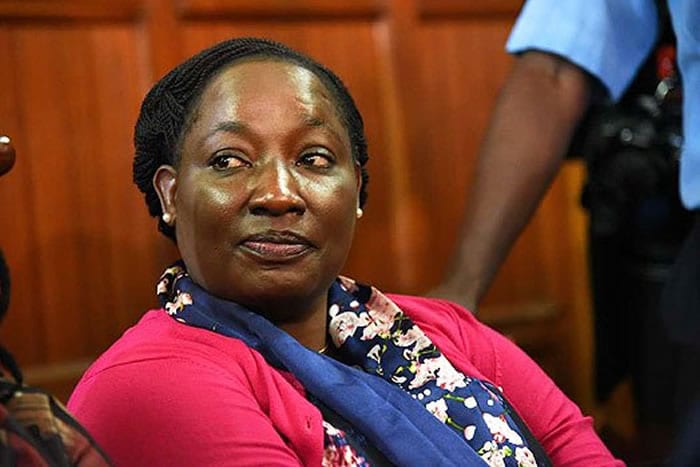 According to the agency, the former PS earns a salary of Ksh.340,000 which they say is enough to sustain her bills and expenses.

The court heard that Ms. Omollo owns and operates a farm which generates money hence she has means to cater for her mortgage and other bills.

“Allowing her to access the funds will render the case useless… she has other means, we pray that you dismiss the application,” the court heard.

In court papers, the agency also claimed investigations have revealed that the funds in issue were acquired through unlawful activities.

“Applicant has not satisfactory explained how she acquired the funds in issue,” reads the papers.

Through lawyer Mohammed Adow, the agency submitted that the application by Ms. Omollo has no merit and is misconceived adding that it should be dismissed.

“The agency did not preserve a total of Ksh.9,805,426.82 held in two accounts hence the assertion that the applicants are subjected to undue hardships, sufferings and are unable to pay their expenses due to the case is not true,” stated Mr. Adow.

In response, Ms. Omollo’s lawyer, Stephen Ligunya, submitted that the salary she is earning is not even enough for her mortgage let alone other expenses.

Mr. Ligunya submitted that the farm in question is not in operation because there is no money to cultivate it.

“We are asking you for the sake of family to make reasonable orders,” submitted Mr. Ligunya.

Ms. Omollo stated that she is unable to pay for her children’s school fees, shelter, as well as basic nutrition for the year 2019 with the continued preservation orders still in force.

“The hardship that the applicants and their dependents will suffer as a result of the preservation orders outweighs the risk that the properties and assets concerned may be destroyed, lost, damaged, concealed and transferred,” reads the court papers.

The matter was heard before High Court judge Hedwig Ong’udi who will deliver the ruling on February 14, 2019.