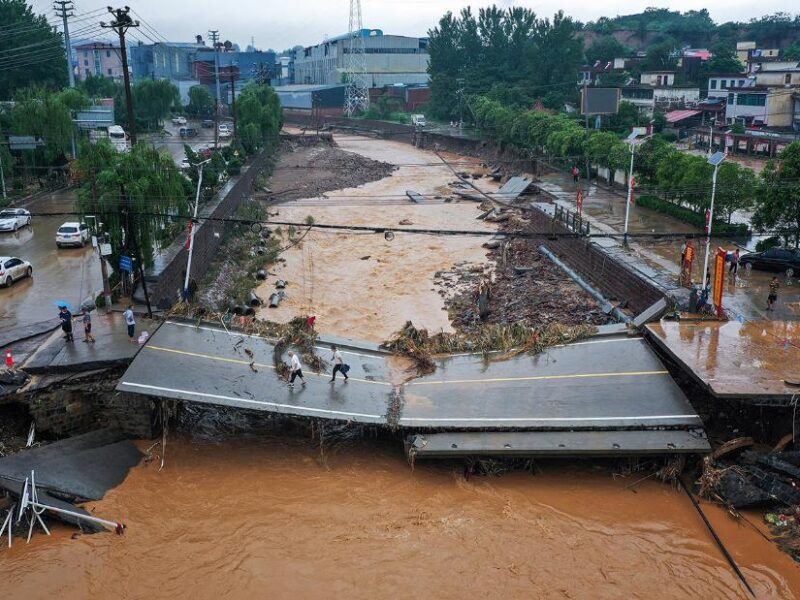 Home to 99 million residents, Henan is one of China’s most populous and poorest provinces, with large swathes of farmlands and factories.

Zhengzhou, the provincial capital of 12 million people, is one of the worst-hit areas, with 12 killed after being trapped for hours on a flooded subway line. But many smaller cities and villages have also been badly ravaged. With more rains forecast for the region, the death toll is expected to rise as rescue work continues.

In Gongyi, a county-level city to the west of Zhengzhou, at least four people were killed as gushing floodwaters swept through streets. Heavy rains also caused widespread collapse of homes and landslides, hampering rescue operations.

In another city, Xinxiang, rivers have swelled beyond warning levels and seven reservoirs have overflowed, affecting 58 counties and 470,000 people, according to state-run People’s Daily.

The severity of the flooding was captured by numerous videos shared on Chinese social media, which showed people and cars swept away in surging torrents. On Thursday, stranded residents have continued to call for help on Wechat and Weibo, the country’s two largest social media platforms, with some sharing photos and information of their missing family members.

‘On the brink of breakdown’

One of the most horrifying scenes from the disaster occurred underground on Line 5 of the Zhengzhou subway.

During the evening rush hour on Tuesday, hundreds of commuters were trapped in rising water as murky torrents gushed into the tunnel and seeped into carriages. Some posted videos and pleaded for help online. Dramatic videos showing people clinging to ceiling handles to keep their heads above the rising waters shocked the nation and made headlines around the world. In another video, several bodies could be seen lying lifelessly on the platform, as rescuers performed cardiopulmonary resuscitation (CPR) on others.

Authorities said more than 500 passengers were evacuated from the inundated subway line, with 12 killed and five others injured.
On social media and in interviews with Chinese media, some survivors shared harrowing accounts of how the disaster unfolded on the subway.

In a post on microblogging site Weibo, a woman said water started to seep into the subway train soon after it came to a stop in between two stations. Subway staff had first instructed passengers to leave the train and evacuate through the tunnel, but they were soon told to turn back because there was too much floodwater ahead.

By the time all of them had returned to the subways cars, the water was already at their waists. It kept rising as more water filled the tunnel and seeped through gaps between the subway car doors.

“We tried to stand on the seats as much as we could, but even then, the water reached our chests in the end,” she wrote. “I was really scared, but the most terrifying thing was not the water, but the diminishing air in the carriage — as many seemed to have trouble breathing.”

She heard another woman giving her family her bank account details on the phone, and wondered if she should do the same. She sent a message to her mother, telling her she “might not make it.” When her mother called back, she was suddenly at a loss for words. She told her she was still waiting for rescue and hung up, and spent the next two and a half hours “on the brink of breakdown.”

Eventually, she fainted due to lack of oxygen, but was later awaken by the vibration of her phone. It was a call from her mother telling her rescue was on the way. At that moment, she heard footsteps on top of the train, and firefighters started to smash open the windows to let in fresh air. She heard more rescuers arriving, and one after another, they were let out — those who fainted were sent out first, followed by women, she wrote. Her post was later deleted. It was not clear why, or by whom — and CNN has been unable to verify her account.

Another woman told state-run China Youth Daily that she couldn’t control herself from weeping when she saw water coming into the train. Around her, some others cried too. But people comforted each other, and gradually, most chose to stay silent to preserve energy.

Some tried to call emergency lines and asked family and friends to get help, but to no avail. By 9 p.m., water inside the train had reached their throats, she said. There were children, pregnant women and the elderly in the crowds, and some people around her started shaking, retching and gasping for air.

“I was really terrified at that time. When I saw the water rising above our heads outside the window, I was preparing myself to accept that I would never be able to get out,” she said.

With only 30% of battery left on her phone, she closed all the other apps on her device and sent messages to her relatives and friends on Wechat, but she didn’t dare to tell her parents, she said. Before 9 p.m., she kept asking them to contact rescuers. But afterward, she was mainly making arrangements for people to take care of things after she died.

‘Once in a thousand years’?

At a news conference on Wednesday evening, officials observed a moment of silence for the flood victims. More than 6,000 firefighters and 2,000 members of the military and paramilitary forces had been deployed across disaster-hit areas, according to officials.

More heavy rains were forecast for Thursday, before they were expected to subside on Friday, according to an official at the provincial meteorological station.

Henan authorities said the intensity of the downpour was unprecedented, with more than 20 centimeters (7.8 inches) of rain dumping onto Zhengzhou in one hour on Tuesday afternoon — accounting for one third of the city’s annual rainfall recorded last year.

Zhengzhou’s meteorological station has described the level of rainfall as “once in a thousand years.” Henan’s water resources department, meanwhile, has called rain levels in parts of the province “once in 5,000 years.”

On Wednesday evening, however, a senior meteorologist pushed back against such descriptions at a news conference in Beijing. Chen Tao, chief forecaster of the National Meteorological Center, said it was hard for meteorologists to draw such a conclusion without reliable longtime data, given that China’s precipitation records only go back to 1951, according to state news agency Xinhua.