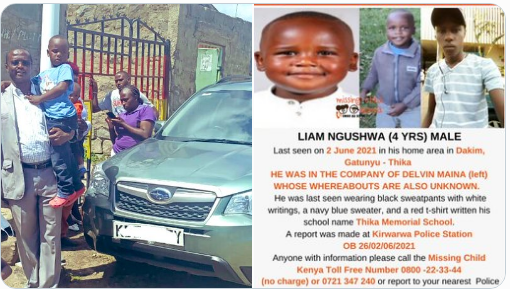 Detectives from the Directorate of Criminal Investigations (DCI) have rescued a 4-year-old boy who had been allegedly kidnapped at his home area in Dakim, Thika, Kiambu County by his grandparents’ houseboy.

According to the DCI, Baby Liam Ngucwa Mwangi, who went missing on Wednesday June 2, 2021 was found at a house in Naivasha, following days of his search.

“The 4-year-old boy has since been reunited with his parents, who couldn’t hide their joy holding the little angel, after five days of tears and anguish,” said the DCI in a statement on Monday.

According to the boy’s parents, their child was in the company of their houseboy Charles King’ori alias Delvin Maina when he went missing.

The parents had turned to social media where they shared an online appeal that went viral, urging Kenyans to volunteer information on the boy’s whereabouts.

Meanwhile, detectives are pursuing baby Liam’s captors, who escaped narrowly moments before the rescue. He was nabbed in Naivasha after attempting to evade arrest.

Charles King’ori alias Delvin Maina, the suspect behind baby Liam’s kidnapping has finally been arrested. The suspect has been arrested a few minutes ago, following a dramatic chase in the streets of Naivasha town witnessed by members of the public. pic.twitter.com/APdWoNSik1