That’s a lot of beef: This cow is taller than you and weighs more than your car 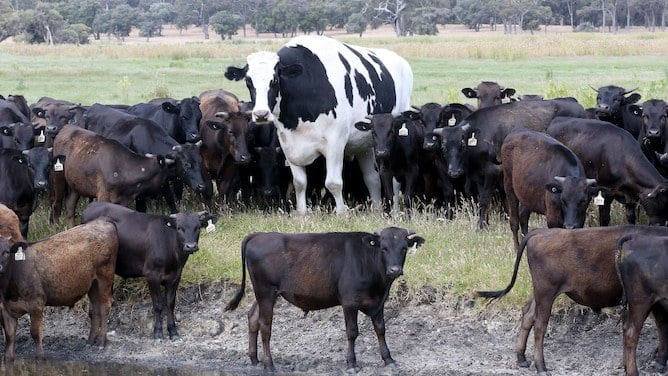 An Australian cow named Knickers is quite literally, a big deal. It is most likely, taller than you, and weighs more than a Toyota Corolla.

Photos of Knickers towering over owner Geoff Pearson’s herd, at his farm in Myalup, Australia have made the steer an online sensation.

Holstein Friesian males are typically 170-180cm in height. Knickers, however, is the fairest of them all at 194cm.

He is a mere 8.7cm shorter than the Guiness Book of Records’ tallest cow, Bellino, living in Rome.

Knickers got his name from a friendship he had with another steer. Pearson said in Knickers’ early days at the feedlot, he was friends with a Brahman steer named Bra. So Bra and Knickers (related to women’s lingerie attire).

Knickers is literally a big deal at his farm. Not just because he is big.

Pearson told the Guardian that he bought him for $400 to live as a coach for other cattle, showing them how to live on a farm.

This, unlike other cattle, seems to be his core purpose as the slaughterhouse is out of bounds for Knickers.

“He’s too big for the chain, he’s out of spec, he’d be too heavy for the machines and he’d probably actually be hanging on the floor, so there would be contamination issues, and his cuts of meat would be too large,” Pearson said.

As for whether genes are responsible for Knickers’ size, experts say DNA tests would be required to say for sure. It is however predicted that Knickers’ pituitary gland, which regulates growth, has “gone haywire”.

According to the Washington Post, Danniel, another humongous Holstein in California that was roughly the same size as Knickers, died this year from a calcium deficiency. Danniel died at eight years old.

Owner Pearson says of Knickers size, “He was just a run-of-the-mill calf that’s turned into a giant.”

Of Knickers’ instant fame however, Pearson remarked, “Obviously he’s gained some stardom – that’s changed his identity a little bit. We’ll have to see what happens with that.”

After ABC’s Jacqueline Lynch broke the Knickers story, Pearson said that the media and interested people have been on a roll ringing his phone out.

People online were all awed and shocked at the Knickers’ phenomenon, putting across their reactions under the hashtag #knickersthecow.

Some of the reactions include Sayanti Dutta on Twitter, saying, “Knickers the cow is like the dinosaur of the cows.”

“The best bit about Knickers the cow is that its name is Knickers”, remarked Jamie Lee.

The best bit about #KnickersTheCow is that it’s name is Knickers.