Brazil suspends use of vaccine made in unauthorized plant 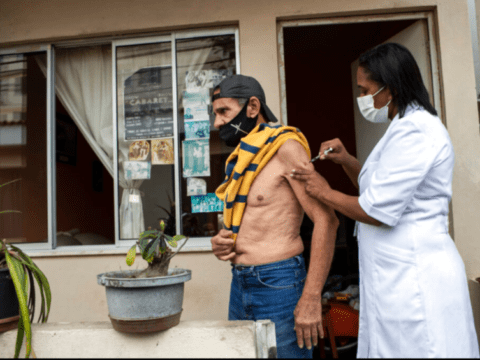 Brazil has placed a 90-day suspension on the use of more than 12 million doses of a COVID-19 vaccine because they were made in a plant that had not been authorized by Anvisa, Brazil’s federal health regulator, Reuters reported. “The manufacturing unit … was not inspected and was not approved by Anvisa in the authorization of emergency use of the mentioned vaccine,” the regulator said Saturday in a statement. Brazil’s Butantan Institute, a biomedical center that has partnered with China’s Sinovac Biotech to locally finish the vaccines, alerted Anvisa on Friday about the doses, but neither disclosed the location of the plant. Anvisa said it would seek to inspect the plant during the 90-day ban. Butantan said 9 million more doses made at the same plant were on their way to Brazil. Concerns spur boosters Several cities in Brazil have begun providing vaccine booster shots even though most citizens have yet to receive their second jabs. The booster shots were prompted by concerns older Brazilians have about the efficacy of the Sinovac vaccine, The Associated Press reported. Rio de Janeiro, Brazil’s delta variant epicenter and home to one of its largest elderly populations, began administering the boosters Wednesday. Northeastern cities Salvador and Sao Luis started on Monday, and the most populous city, Sao Paulo, will begin Monday. The rest of the nation is expected to follow the next week. France, Israel, China and Chile are among those countries giving boosters to some of their older citizens, and a U.S. plan to start delivering booster shots for most Americans by September 20 is facing complications that could delay third doses for those who received the Moderna vaccine, administration officials said Friday. Japan and South Korea, both of which wrestled with slow vaccine rollouts, are planning booster shots in the fourth quarter of this year. Malaysia also is considering boosters, but Health Minister Khairy Jamaluddin said those who had yet to receive their first shots were being prioritized. Thailand began giving booster shots this week, but only for health and frontline workers.

Russia, Hungary and Serbia also are giving boosters, although there has been a lack of demand in those countries for the initial shots amid abundant supplies.
According to AP, France’s worst coronavirus outbreak is unfolding 12 time zones away from Paris, devastating Tahiti and other idyllic islands of French Polynesia.

Regional health officials say the South Pacific archipelagos lack enough oxygen, ICU beds and morgue space — and that the vaccination rate is just half the national average. France’s highest rate With more than 2,800 COVID cases per 100,000 inhabitants, the region now holds France’s record for the highest infection rate. The majority of the region’s 463 documented COVID-19 deaths have taken place in the past 30 days.

New Zealand officials on Saturday reported the country’s first COVID-related fatality in more than 200 days. Doctors said the nonagenarian had several underlying health problems in addition to COVID-19.
American boxer Oscar de la Hoya was hospitalized with COVID-19 late on Friday, forcing him to drop out of a comeback fight scheduled for next month. The Hall of Fame fighter said on Twitter that he was fully vaccinated earlier this year.

German news agency dpa on Saturday reported that a man attacked two members of a vaccination team operating a shopping mall medical kiosk in the east German town of Gera after he demanded a vaccination certificate without being vaccinated. The man, who was not identified, injured a nurse and a medical assistant after they refused to comply with his demands. Police later arrested the man, who was also injured in the attack, at a nearby parking garage. Fifth variant World Health Organization officials earlier this week designated the coronavirus variant known as mu or “B.1.621” as a “variant of interest,” becoming the fifth variant to be monitored by the global health body. Dr. Anthony Fauci on Thursday said U.S. public health officials were “keeping a very close eye” on a new variant of the coronavirus that causes COVID-19 that was first detected in Colombia. Johns Hopkins Coronavirus Resource Center said Saturday evening that it had recorded nearly 220.2 million global COVID-19 infections and 4.6 million deaths. The center said 5.4 billion vaccines had been administered.