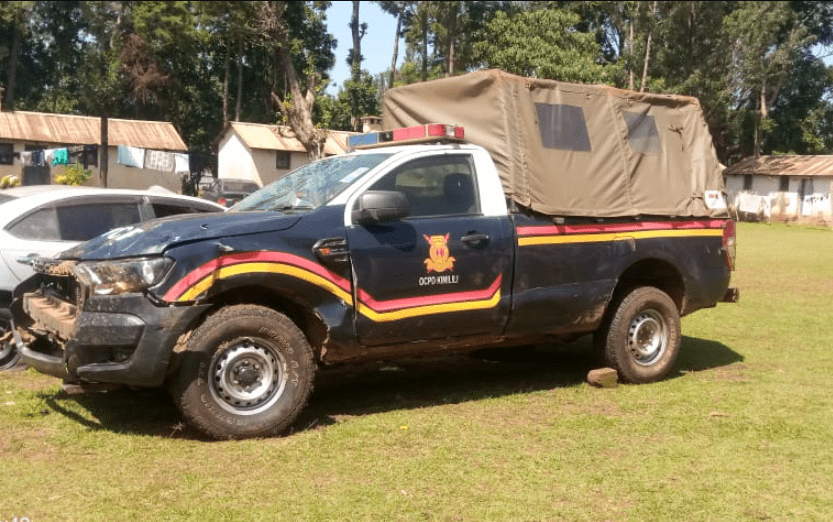 A man in Sikhendu village on the outskirts of Kimilili town in Bungoma County is seeking justice after his wife was knocked down and killed by a police vehicle.

Margaret Nabudwa, who sold groceries outside Kimilili Police Station, was knocked by the vehicle when she was leaving for home on Wednesday evening.

The 59-year-old mother of four died on the spot after sustaining broken limbs and suffering internal injuries.

A boda boda rider who was also knocked down by the same vehicle during the accident escaped death by a whisker.

The driver of the police vehicle who is said to have been going at a very high speed also sustained injuries and was rushed to the Kimilili sub-county hospital for treatment.

The deceased’s husband, James Thuku Ndicho, said he left her as she went about her work in the morning after breakfast, only to be called later in the evening at around 7pm that she had been knocked down while rushing home to beat the curfew.

“I rushed to the scene and found my wife dead, I was so saddened that I could not speak a word. I am only appealing to relevant authorities to help me get justice,” he said.

Pastor Shadrack Ngugi, a neighbour of the deceased, said the death was a result of carelessness alleging that the driver seemed drunk.

He said Nabudwa’s death had robbed the community of a dedicated businesswoman who was loved by many.

“If the police who are supposed to be protecting lives are the ones that are taking the lives of innocent people where are we going? We want the officer arrested and charged,” he said.

Kimilili sub-county Police Commander Nelson Marwa said investigations have since been launched into the incident.

The body of the deceased has since been taken to the Dreamland morgue in Kimilili.