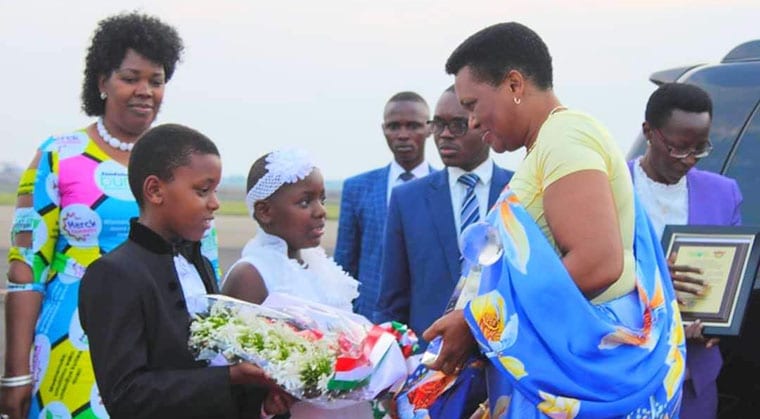 Burundi’s First Lady Denise Nkurunziza has returned home from Kenya where she had been hospitalised for almost a fortnight.

Local media reported that the First Lady landed at the Melchior Ndadaye International Airport in Bujumbura on Tuesday evening.

“Denise Bucumi Nkurunziza arrived on board a non-medicalised flight by the Kenyan private company Phoenix. It was a jet with the captain and the co-pilot only,” SOS Media Burundi said.

Reports indicate that the Kenyan Ambassador to Burundi Ken Vitisia was among those who received her at the airport.

The First Lady was evacuated to Aga Khan Hospital, Nairobi on May 27 but Burundian authorities are yet to disclose what disease she was suffering from.

According to the BBC, an official in the Burundi President’s office denied that she had contracted coronavirus.

She returns to the country two days after her husband President Pierre Nkurunziza died from cardiac arrest.

The 55-year-old passed away at the Karusi Fiftieth Anniversary Hospital following a cardiac arrest on June 8, 2020.

Burundi has announced seven days of national mourning and the country’s flags will fly half-mast during this period.

Before his death, Nkurunziza had received global backlash for doing little to stop the spread of coronavirus in his country.

A top World Health Organization (WHO) representative and three other experts who were coordinating response to the pandemic were ordered to leave the country earlier this month.

The number of coronavirus cases in Burundi have so far been reported to be 83 with one person succumbing to the disease.