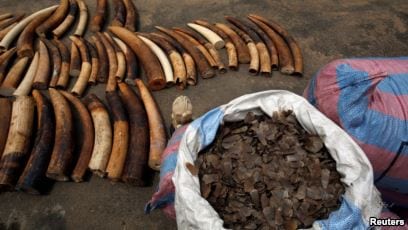 Police in Cameroon have arrested four wildlife traffickers caught with huge quantities of elephant tusks and scales from pangolins. The traffickers, said to be operating across Africa, were planning to transport the scales and ivory to Asian countries through Nigeria.

Francis Durand Nna, the highest wildlife official in Cameroon’s coastal city of Douala, says the traffickers were arrested following a tipoff from residents.

He says the police supported by Cameroon’s Ministry of Forestry and Wildlife and conservation groups including the Last Great Ape, LAGA, seized scales harvested from at least 3,000 pangolins and 300 elephant tusks plucked from 150 elephants that were illegally killed. He says it is an enormous loss to biodiversity, nature and the economy. He is calling on people to adhere to the fight to protect wildlife and forest resources because only traffickers benefit.

Police say the men are part of an organized ring operating in parks and protected areas on Cameroon’s eastern and southern borders, and possibly working with accomplices in the neighboring states.

Central and Eastern Africa are hotspots for poaching and trafficking pangolins, an animal also known as the scaly anteater.

Boniface Dogmo, a senior wildlife control official at the Ministry of Forestry and Wildlife, says Cameroon has been implementing its anti-poaching and trafficking laws, but says the practices are difficult to stop because of the huge demand for certain animal products in Asia.

In Vietnam, pangolin meat and scales can fetch up to $1,000 per kilogram.

Eric Kaba Tah, a media official for LAGA says traffickers quite often deliver their illegal catch to Nigeria, from where it is shipped to Asia, the biggest source of demand for pangolin scales and ivory.

He says corrupt practices from government officials and the police is making it difficult to stop the illegal trade.
“These traffickers are very top professionals,” he said. “They know the mechanisms of corruption extremely well. They are international, they are young, they turn to move from where there is strong wildlife enforcement to where wildlife law enforcement is not very strict. Traffickers are given lenient treatment, which is a very wrong signal.”

International trade in pangolins was banned in 2016 under the Convention on the International Trade in Endangered Species (CITES).

But the trade continues. In 2017, officials in Cameroon seized and burned more than three tons of pangolin skins and scales that were destined for Asia.