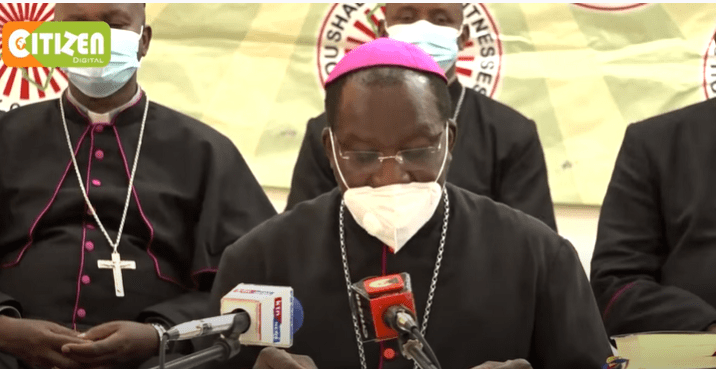 The Catholic Church on Thursday called for the postponement of any far-reaching constitutional changes until after next year’s General Election.

The church, through the Kenya Conference of Catholic Bishops, however, discouraged any talk or proposal to move next year’s polls.

The church wants the recruitment of four IEBC commissioners expedited and a speedy resolution of the stalemate revolving around the appointment of 40 High Court and Court of Appeal judges.

The 23 Catholic Church clerics, at the end of their plenary assembly at Marian National Shrine in Subukia, Nakuru Diocese, dropped a bombshell that could further complicate the clamour for constitutional amendments.

“We propose that to ensure a democratic, constitutional and inclusive process that is based on law and dialogue, far-reaching constitutional amendments should only be addressed after 2022 General Elections,” said the conference Chairman Most Rev. Martin Kivuva in a press address.

According to the Catholic bishops, it was untenable to hold a referendum and a general election which is 437 days away.

“In the meantime, Kenyans should pursue, through Parliament, some essential reforms to ensure peaceful, progressive and a prosperous country in the led up to after 2022 Genera Elections,” stated Rev. Kivuva.

The referendum push has been clouded by claims of a plan to postpone the August 9, 2022 polls, ostensibly to facilitate implementation of changes that would have been effected; an idea the church leaders oppose.

“We demand that the August 2022 General Elections proceed as provided for in the Constitution, (and that there is) no thought of postponing it to a later date,” Rev. Kivuva said.

Law Society of Kenya (LSK) President Nelson Havi, in a letter to Appellate Court President Daniel Musinga, proposed a 7-judge or 11-judge bench to hear and determine the BBI appeals. The Court of Appeal currently has 12 judges.

On electoral matters, the Catholic bishops called for expeditious recruitment of four IEBC commissioners after High Court judges ruled that the commission, with three commissioners currently, is not properly constituted to conduct business.

President Kenyatta has appointed and gazetted Morris Kimuli to the IEBC selection panel and revoked the appointment of Dorothy Jemator, in compliance with a court order, after weeks of supremacy battles pitting Havi and LSK CEO Mercy Wambua.

“The fact that it has taken several years to replace the commissioners who moved to this institution signals a reluctance as a country to get governance systems in a way that they can gain public trust,” added Rev. Kivuva.

The Catholic bishops at the same time urged President Kenyatta and Chief Justice  Martha Koome to resolve the standoff over appointment of 40 judges nominated by the Judicial Service Commission (JSC) in 2019.