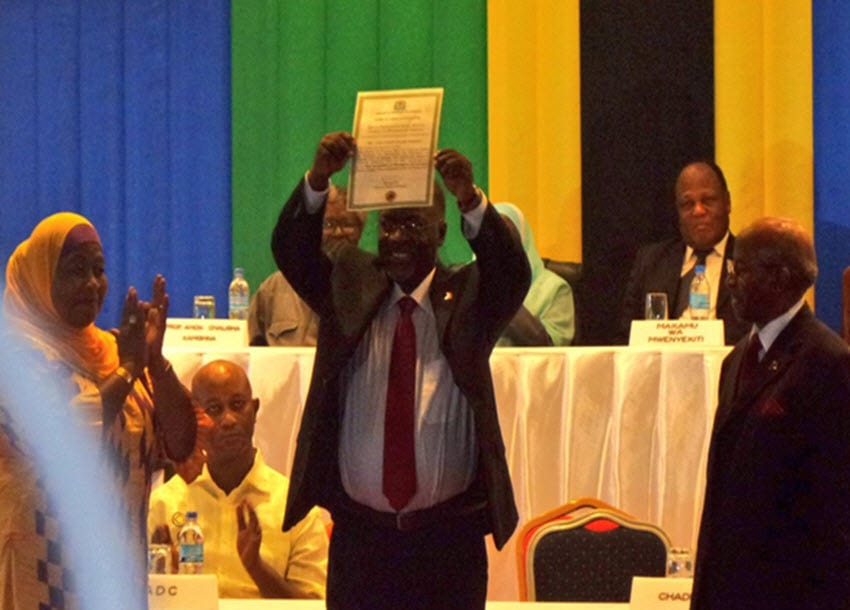 Tanzania’s President elect Dr. John Pombe Magufuli has been presented with the election certificate, the second last step to his journey of replacing the outgoing President Jakaya Mrisho Kikwete as the country’s fifth Head of State and government.

The final step will be his swearing in, and this is slated for Thursday, November 5th 2015.

The ceremony, which took place at the Diamond Jubilee Hall in the capital of Dar Es Salaam, was attended by hundreds of supporters of Dr. Magufuli and the Chama Cha Mapinduzi (CCM) party.

During the ceremony, Tanzania National Electoral Commission (NEC), chair Justice (Rtd.) Damian Lubuva said the commission carried out its functions in accordance with the law and independently, dismissing rigging claims leveled by the opposition.

Upon presentation with the certificate, the ceremony sealed any openings for contesting the election as the pronouncement of the electoral commission is final. No disputes can be raised by any aggrieved party.

Magufuli is a renowned workhorse, and his campaign agenda was pegged on performance, development and improved service delivery. The incoming president has always insisted that Tanzania must realize its dream of unmatched economic development, better education, better healthcare, and equal and better employment opportunities for the large population-especially the youth.

The president-elect, who is also the immediate former Minister for Infrastructure, during his campaigns said that his government will not discriminate against any Tanzanian because of their political, economic or social background.

Dr. Magufuli was accompanied by his running mate Samia Suruhu, who was also presented with certificate of election as the Vice President of the United Republic of Tanzania.

The ceremony went on despite the opposition Chama Cha Demokrasia na Maendeleo (Chadema) saying that it had presented a petition to NEC challenging the outcome of the election and the general conduct of the electoral process.

Chadema’s Edward Ngoyai Lowassa, who came second after garnering slightly over six million votes after Magufuli’s 8.8 million, said he would not accept the results or recognize the victory of Dr. Magufuli.