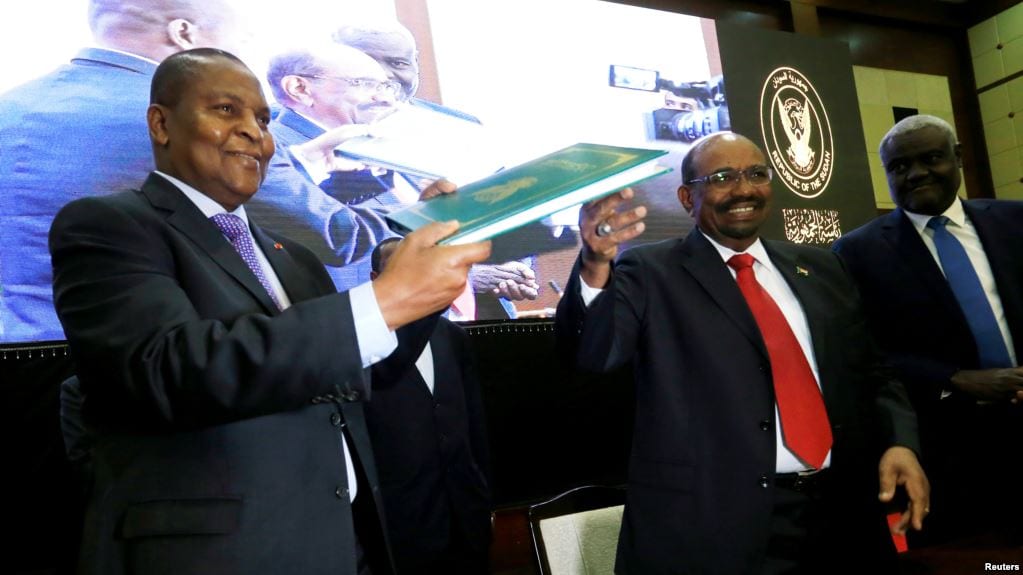 The agreement represents rare hope for one of the world’s poorest nations, where religious and communal fighting erupted in 2013. Thousands of people have been killed and hundreds of thousands displaced in a conflict that has sent two people to the International Criminal Court.

“The difficult time starts now, and that is implementing the Khartoum Agreement. … This agreement is crucial for peace,” said Herbert Gontran Djono Ahaba, speaking on behalf of the rebels. The talks that began Jan. 24 in Sudan’s capital were the first-ever direct dialogue among the warring parties.

Representatives of the rebels shook hands with President Faustin Archange Touadera and Sudanese President Omar al-Bashir after they initialed the deal.

“Now is the time for us to turn a new page, the page of Central African Republic which has reconciled with itself, in order to preserve its dignity,” Touadera said, adding: “We do not have the right to disappoint.”

Details of the agreement have not been announced. The head of Central African Republic’s government delegation said they will announce them after the formal signing back home in the capital, Bangui. A date has not been set.

“I’m very happy to see this day,” African Union Commission Chairman Moussa Faki Mahamat said. The AU facilitated the talks, supported by the United Nations. “Concessions should be made, and we should all accept each other, and this page should be closed, the page of violence and destruction.”

The fighting has carried the high risk of genocide, the U.N. has warned. The conflict began when predominantly Muslim Seleka rebels seized power in Bangui. Largely Christian anti-Balaka militias fought back. Scores of mosques were burned. Religious leaders were killed. Many Muslims fled the country after mobs decapitated and dismembered some in the streets.

The vicious fighting in a country known more for coups than religious violence was so alarming that Pope Francis made a bold visit in 2015, removing his shoes and bowing his head at the Central Mosque in the last remaining Muslim neighborhood of the capital.

“Together we say ‘no’ to hatred,” the pope said.

The violence has never disappeared, intensifying and spreading last year after a period of relative peace as armed groups battled over lands rich in gold, diamonds and uranium.

In a grim report last year marking five years of conflict, the U.N. children’s agency said fighters often target civilians rather than each other, attacking health facilities and schools, mosques and churches and camps for displaced people. At least half of the more than 640,000 people displaced are children, it said, and thousands are thought to have joined armed groups, often under pressure.

Last month, the chief of Central African Republic’s soccer federation appeared at the ICC for the first time since he was arrested last year in France on charges of crimes against humanity and war crimes. Patrice-Edouard Ngaissona is accused of leading the anti-Balaka for at least a year early in the fighting.

He allegedly commanded some 3,000 fighters in a predominantly Christian militia in and around the capital early in the fighting. He was arrested last year after firing gunshots in parliament.

So far, no Seleka fighters have been publicly targeted by the court’s chief prosecutor, Fatou Bensouda.

On Thursday, the U.N. Security Council voted unanimously to extend an arms embargo on Central African Republic for a year but raised the possibility that it could be lifted earlier, as the government has long urged.