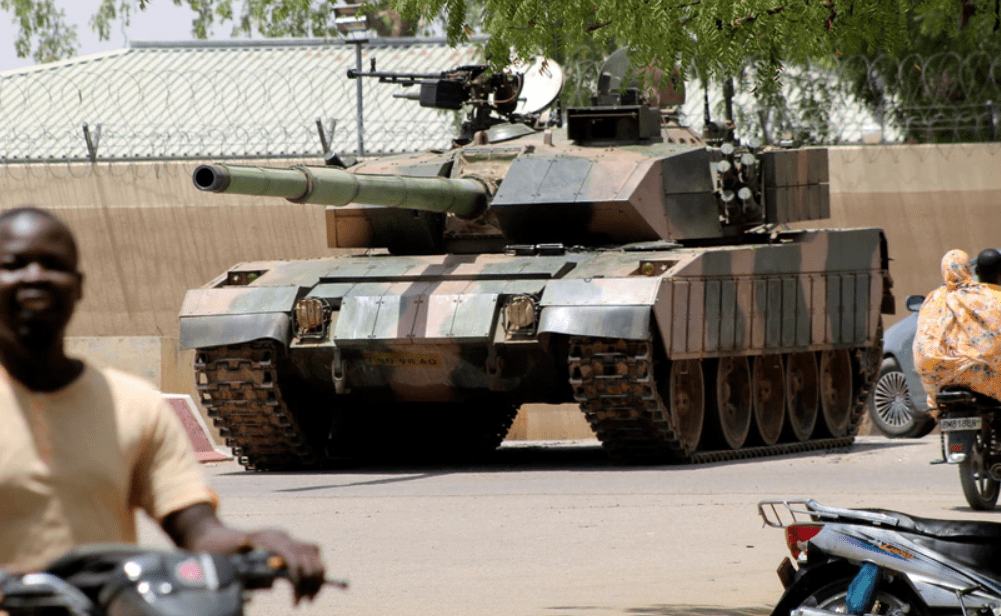 An uneasy calm pervades Chad’s capital N’Djamena since Friday’s funeral for President Idriss Deby, who ruled the central African country for more than 30 years. Civilians say handing over power to Deby’s 37-year-old son to lead a transitional military council for 18 months is undemocratic.

Inoussa Labarang, 37,  feeds his 27 chickens at his residence in Farcha, a neighborhood in Chad’s capital N’Djamena.

Labarang says he expected to sell two chickens to raise money and buy millet to feed his family for at least three days.

But no customer has come since the country’s long-serving President Idriss Deby was killed during a clash with rebels, he said.

Fear has gripped the city.

Labarang has a second job as a security guard for shop at night, where he earns $40 each month.

The additional income helps him feed his wife and five children.

From the little he earns, he gives his wife $10 to buy and sell groundnuts to generate more income.

He is struggling, but he said his country should be wealthy. He believes the issue is with governance, pointing squarely at the leadership of the late President Deby, saying that he has given Chad’s wealth to an elite circle of family and friends.

He is one of many in the country who believe that the transition and appointment of the late president’s son during this period is unconstitutional.

According to Chad’s Constitution, the speaker of the parliament must take over when a sitting president dies before elections can be held, he said.

Before he was killed, provisional results showed that Deby won re-election for a sixth term in office.

On April 20, the day of Deby’s death, Chad’s military announced on state media the creation of an 18-month transitional military council led by General Mahamat Idriss Deby, the 37-year-old son of the late president.

A rebel force known as the Front for Change and Concord in Chad or FACT, released a statement vowing to take the capital and depose the 37-year-old.

The transitional military council, Abdoul said, also declared a curfew in N’Djamena and is restricting movement of people in the city of over a million people.

“There is total confusion in the whole country. There is a lot of uncertainty,” he said. “People are afraid to go out and the town has been virtually militarized. Chad does not know what future is being reserved for them. The opposition is not yet satisfied. The rebels too are threatening, so there is fear.”

Chad’s state radio and TV have been broadcasting messages from Mahamat Idriss Deby calling for peace. In the message the new leader says he is open to dialogue.

He says he is very thankful for the support a majority of Chadians and friendly nations, especially France, have given his family since President Idriss Deby’s death. He says his father worked tirelessly for peace, reconciliation and the unity of Chad.

Idriss Deby always encouraged dialogue, he said, as a solution to all forms of crisis. He says with the support of Idriss Deby’s family and the Chadian people, he will continue to defend his father’s ideology that is loved by most Chadians.

Deby was a key ally of France in the fight against jihadist groups across West Africa including Boko Haram, which has destabilized the parts of Chad, Cameroon, Nigeria and Niger.

In a statement, Max Loalngar,  one of the leaders of a civil society coalition called Coordination of Citizen Actions, accused France and regional allies of undemocratically backing the fallen president’s son to take power.

The group said Chad is not a monarchy.