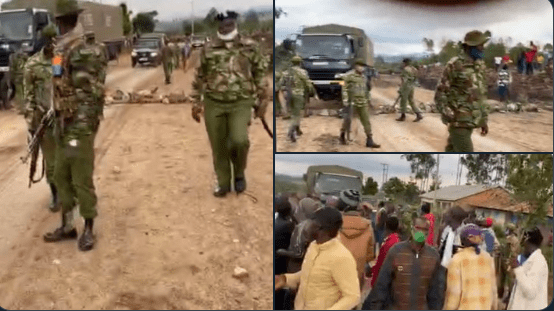 Emurua Dikirr MP Johanna Ng’eno has been arrested by police officers from Transmara East over claims of incitement.

The outspoken legislator was arrested at his Magondo home on Monday evening in a dramatic showdown that saw hundreds of his supporters trooping to the streets in protests.

He was carted off to the Emurua Dikkir police station, several kilometers from his home with his supporters close at his wake.

Police officers had a hard time controlling the huge crowd among them bodaboda riders that had pitched tent at the MPs home after getting wind of his impending arrest.

Reports say officers were forced to fire in the air to disperse the crowd that had attempted to stop the arrest.

A good number of motorbikes that were damaged during the scuffle were towed to the Emurua police station on Monday evening.

Ng’eno who is not new to controversy is accused of making statements, inciting constituents against President Uhuru Kenyatta and his family during a visit to Kiminnet in Transmara on Sunday.

There were claims that the MP would be transferred to Nairobi on Monday night ahead of day in court.