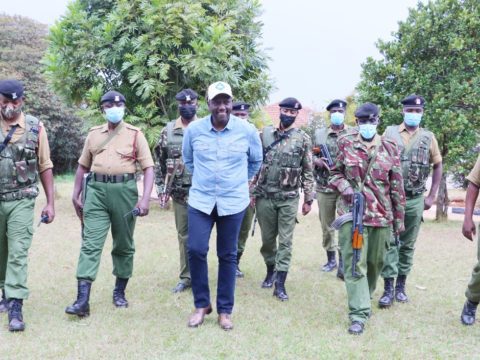 The senator has petitioned the senate that is on recess to convene a special sitting, and summon Interior Cabinet Secretary Fred Matiangi, the Inspector General of Police, Presidential Escort Commandant and the General Service Unit Commandant over downgrading of securty details at DP Ruto’s official residence and home.

Cherargei wants the four to appear for a special sitting of the Senate on Thursday to explain the controversial replacement of the deputy president’s security.

The senator is seeking an explanation on the swapping of the security agencies, terming the move as unconstitutional.

Last week the police service withdrew 77 of the elite General Service Unit guards protecting the DP’s official residence in Karen and his Sugoi home and replaced them with Administration Police officers from the Security of Government Buildings (SGB unit).

On Monday, the deputy president held a welcoming party to the new police officers posted to man his residence. He described the event as a sharing of a cup of tea with the new security team as he welcomed them to the official residence .

Cherargei also wants the security chiefs probed over the deaths of several Kenyans at the hands of police officers enforcing the nationwide dusk to dawn curfew.

The senator wants the security bosses to explain the inhumane evictions and extra judicial killings happening across the country during curfew hours in the country.

Six police officers are in court for the alleged murder of the Kianjokoma brothers for allegedly breaching curfew hours.