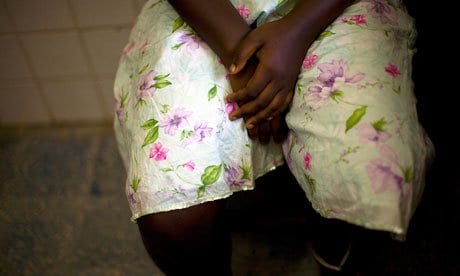 A family in Pumpiniet village of Trans Mara, Narok County is celebrating the return of their daughter, Jackline Chepkoech Maiwa, who disappeared in 1998 in a case of child trafficking.

According to Richard Mitei, Chepkoech’s father, her daughter was lured by a potential employment opportunity by a Tanzanian woman.

“My relatives kept telling me to accept that my daughter was probably already dead but I always told them off, demanding to know where she had been buried. Her search has been long and excruciating for our family,” Mitei told Citizen Digital.

According to Jackline, her employer turned out to be a barren woman seeking to make a surrogate mother out of her. With the help of a neighbor, Chepkoech managed to escape and was directed to a chief’s home in Kuria District but, as it turned out later, her tribulations had only just began.

“He forced me into circumcision in readiness for a marriage I was not even aware of. The chief received the dowry and I was whisked away,” Chepkoech explained.

“I’d like to thank the woman who helped me get back to the country. After all those years I was almost convinced I was never going to make it back home, but she lent me some money and encouraged me to leave as quickly as possible,” she said.

She called on the government to rescue to other girls who she said were being confined in the same district and weren’t brave enough to escape.

Trans Mara residents, led by village elder Joseph Kirui and area Chief John Rono, celebrated the return of their own, who has been away for almost two decades.

“We thank God for bringing Chepkoech back to us. On behalf of the government I would like to promise that we will not let anyone who had a hand in this get away with it. Female Genital Mutilation, child trafficking and forced marriages are serious crimes that the government will not turn a blind eye on,” Rono stated.