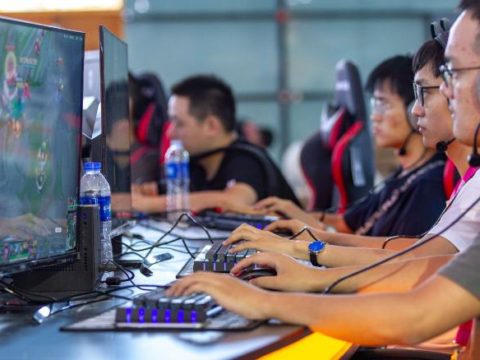 China has barred online gamers under the age of 18 from playing on weekdays and limited their play to just three hours most weekends, marking a significant escalation of restrictions on the country’s massive gaming industry. Starting this week, minors will be allowed only an hour of play time between 8 pm and 9 pm on Friday, weekends and public holidays, according to a statement from Chinese media watchdog — the National Press and Publication Administration (NPPA) — that was posted by state news agency Xinhua on Monday. The move represents a huge tightening of earlier limits set by the agency in 2019, which had restricted play to 90 minutes on weekdays and three hours on weekends for children. Authorities said that the restrictions were put in place to help prevent young people becoming addicted to video games. The NPPA noted this week that the rules were being issued “at the beginning of the new [school] semester, putting specific requirements for preventing the addiction to online games, and protecting the healthy growth of minors.” Investors were quick to react. NetEase (NTES) slumped 3.4% during regular trading hours in New York on Monday. Tencent (TCEHY) suffered roughly the same drop in Hong Kong on Tuesday before ticking back up 1.6%. An escalating crackdown In recent months, China has embarked on a major clampdown on private enterprise, which has engulfed some of the country’s top players. Initially, it appeared that regulators’ main target was the booming tech sector, but lately that has expanded to reach other industries, such as private education. Alicia Yap, an analyst at Citi, said that she expected the impact of the latest curbs on gaming companies to be “minimal,” with less than a “low single digit” hit to China revenue for both Tencent and NetEase. “That said, we believe this will still represent another setback to the industry and potentially send another wave of negative sentiment to the market and lower investors’ overall expectations for future gaming industry growth,” she wrote in a note to clients Tuesday. People playing online games one day before the China Digital Entertainment Expo & Conference at the Shanghai New International Expo Center on Aug. 1, 2019. People playing online games one day before the China Digital Entertainment Expo & Conference at the Shanghai New International Expo Center on Aug. 1, 2019.

At a news conference Monday, a spokesperson for the NPPA said that the strict new curbs were in response to complaints from parents.
“Many parents said that teenagers’ addiction to online games seriously affected their studies, and physical and mental health, leading to a series of social problems, making many parents suffer,” said the unidentified representative, according to a report by Xinhua.

In recent years, the Chinese government implemented a registration system which required people who played computer games to do so under their real names, allowing companies to check up on them. This week, it reiterated that policy, with the NPPA noting that “online game enterprises shall not provide game services in any form … to users who have not registered or logged in with their real names.

In a statement Tuesday, Tencent said it had been working on “various new technologies and functions for the protection of minors” since 2017.
“That will continue, as Tencent strictly abides by and actively implements the latest requirements from Chinese authorities,” the company added.

Tencent has previously noted that the amount of revenue it earns from minors playing games is relatively small. In its most recent earnings presentation, it said that players under the age of 16 accounted for only 2.6% of its gross gaming receipts in China. Martin Lau, the company’s president, also said at the time that “there are a lot of new regulations that will be coming, but we are pretty confident that we can be compliant.” The Chinese tech giant had already made headlines earlier this month for announcing limits on the amount of time minors could spend playing the company’s online games, such as the popular title “Honor of Kings.” Under those rules, minors could play the game for only two hours on holidays, and an hour on other days.That statement came after a newspaper owned by Xinhua published a lengthy analysis that used terms such as “spiritual opium” and “electronic drug” to describe the harmful effects of gaming on children. NetEase did not immediately respond to a request for comment. The new rules prompted outcry on Chinese social media, where many users complained that they were too strict. “This policy presumes that gaming is bad,” wrote one user on Weibo, China’s Twitter-like platform. Some also pointed out the drawbacks of imposing a blanket ban, suggesting that there should be rules that apply for “different kinds of games and minors of different ages.” “Are [the ages of] 7 and 17 the same?” asked another Weibo user. Others fretted that it would ultimately put the country behind in the world of competitive gaming. “China doesn’t have the future for e-sports then. It’s impossible for teens to train,” wrote a third Weibo user. “Kids in other countries [will] win the world’s champion at 17 years old, while we start to play the game at 18.”