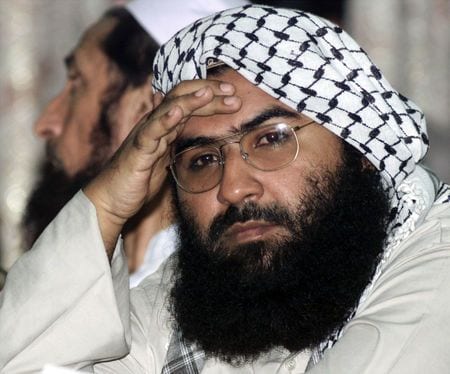 China prevented a U.N. Security Council committee on Wednesday from blacklisting the head of Pakistan-based militant group Jaish-e-Mohammed (JeM), which said it attacked an Indian paramilitary convoy in disputed Kashmir.

India said it was disappointed at the block, which sparked calls for boycotts of Chinese products on domestic social media, while the United States said it was counter to a goal it shared with China of achieving regional peace and stability.

The Feb. 14 attack that killed at least 40 paramilitary police was the deadliest in Kashmir’s 30-year-long insurgency, escalating tension between the nuclear-armed neighbors, which said they shot down each other’s fighter jets late last month.

China placed a “technical hold” on the request, according to a note from its U.N. mission to the committee, seen by Reuters. China gave no reason for the hold, which places the request in limbo.

In a statement on Thursday, the U.S. embassy in New Delhi said it did not comment on specifics as the deliberations were confidential, but added:

“We will continue working with the sanctions committee to ensure the designations list is updated and accurate.”

China had previously prevented the sanctions committee from sanctioning Azhar in 2016 and 2017.

Chinese Foreign Ministry spokesman Lu Kang said on Thursday that the Security Council has specific procedures for naming a person or organization on the terror list.

In a statement late on Wednesday, India’s Ministry of External Affairs vowed to pursue “all available avenues to ensure that terrorist leaders who are involved in heinous attacks on our citizens are brought to justice”.

“There is really no moral rationale for blocking this proposal (on Azhar),” Anand Mahindra, chairman of the Mahindra Group conglomerate, said on Twitter.

“Frustrating for those wanting to strengthen Indo-Chinese relations. How should India respond?”

Speaking on condition of anonymity, a U.N. Security Council diplomat said that if China continued to prevent the designation of Azhar, other council members “may be forced to pursue other actions at the Security Council.”

The diplomat added, “The case for designating Masood Azhar – the leader of a group the U.N. already calls an al-Qaeda-affiliated terrorist organization – is undeniable.”

Western powers could also blacklist Azhar by adopting a Security Council resolution, which needs nine votes in favor and no vetoes by Russia, China, the United States, Britain or France.
Blacklisted by the U.N. Security Council in 2001, JeM is a primarily anti-India group that forged ties with al Qaeda.

In December 2001, an attack on India’s parliament by the group’s fighters and those of another Pakistan-based militant group, Lashkar-e-Taiba, nearly triggered a fourth war between the neighbors.

Azhar founded JeM in 2000 after a hostage exchange that freed him from an Indian prison in return for 155 people held on a hijacked aircraft.

Pakistani authorities have linked JeM with two assassination bids on former President Pervez Musharraf in 2003 as well as the kidnap and murder of U.S. journalist Daniel Pearl in 2002.