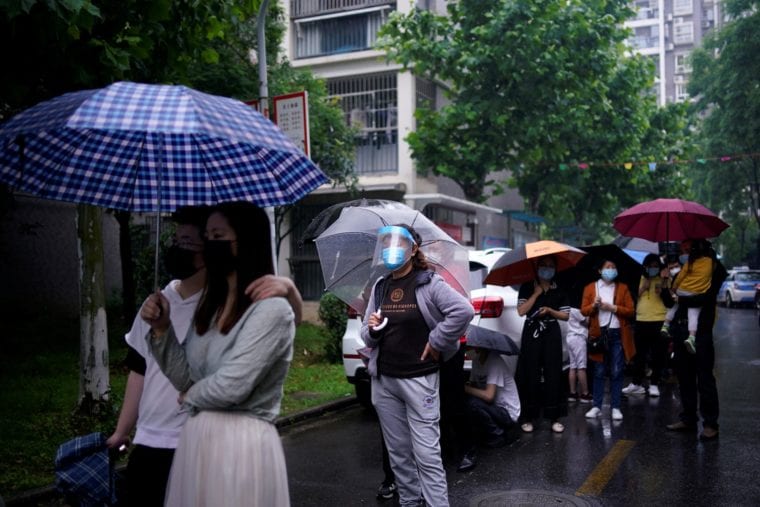 The Chinese city of Wuhan said it has tested its entire population of 11 million people for COVID-19, part of an ambitious national plan to restore public confidence and get the country’s economy restarted.

The mass testing campaign ended up reporting 206 cases of active COVID-19 infections, all of which were classified as asymptomatic.

Over the course of the outbreak, the city has so far reported over 50,000 confirmed cases.

Why did the city test everyone if so few people are positive?

Analysts say that the campaign appears to be aimed more at reassuring the public than addressing public health.

Wuhan is the city where the virus first emerged in late December.

The campaign dabbled “10 days of battle” began on May 14 after Wuhan reported a cluster six new cases on the weekend of May 9, after 35 days without reporting any new infections in the city.

Wuhan then began vigorous testing. In order to be able to test all 11 million residents in 10 days, the city adopted a pooled testing method that enabled health workers to assess as many as 10 samples simultaneously.

If a positive result came from a batch, authorities then followed up with assessments on each person in the group.

However, Dr. Huang Yanzhong, a senior fellow for global health at the Council on Foreign Relations, argued the method does not provide high accuracy rate.

“The testing was performed with throat swabs. They are less invasive so more people will be willing to get tested, but they are also less sensitive than the COVID-19 nasal swab test,” he told VOA Mandarin.

Huang said that these less sensitive individual samples were further diluted during the mixing process. “It’s possible that out of 100 positive tests, there would be approximately five false positives,” he said.

According to Huang, this method was chosen more out of political considerations than public health concerns.

“The goal is to mitigate fear,” said Huang. “After the emergence of new cases, people were afraid to go out and resume normal economic activities.” He added that mass testing could potentially avoid another strict lockdown.

The campaign was not universally supported.

According to Chinese state media, the Wuhan testing cost around $280 million (RMB 2 billon), which led some to wonder if it was necessary when infection rates are relatively low.

Dr. Wu Zunyou, the chief epidemiologist of China’s Center for Disease Control and Prevention, said on state television that testing should be tailored to key areas and key groups. “In communities without infections, there is no need to screen everyone,” Wu said.

Wuhan residents also expressed concerns to VOA Mandarin that there might be health risks by waiting in hour-long lines to get tested.

Mr. Qian, a Wuhan resident who declined to give his full name because he works at a government-owned company, told VOA that although the testing is voluntary, resuming your daily routine is entirely dependent on obtaining “a health code.”

“You will receive a text from local health officials, along with your national ID, you will get tested. If you test negative, you will receive this ‘health code’, and only then you can return to work,” he said.

Relying on mobile technology and big data, the Chinese government has used a color-based “health code” system to control people’s movement and curb the spread of the coronavirus. Green means you’re free to proceed. Red means you’re barred from entry.

Mr. Tang, who declined to give his full name because he was laid off during the epidemic and just landed a new job with a government-owned company, told VOA Mandarin he rushed to get tested so he could get to work. “My new firm requires me to show a green health code on my phone (a negative COVID-19 testing result) to begin work,” he told VOA Mandarin. Tang and Qian do not work at the same government-owned company.

The Wuhan Municipal Government has enlisted hundreds of staffers to go from house to house to “find the weak point,” to notify those who haven’t been tested.

If a resident cannot obtain a green health code, it will affect his or her daily life. For example, they will not be allowed to enter public areas such as banks or supermarkets, and they may also be restricted from traveling.