China threatens action on its citizens breaking laws in Kenya 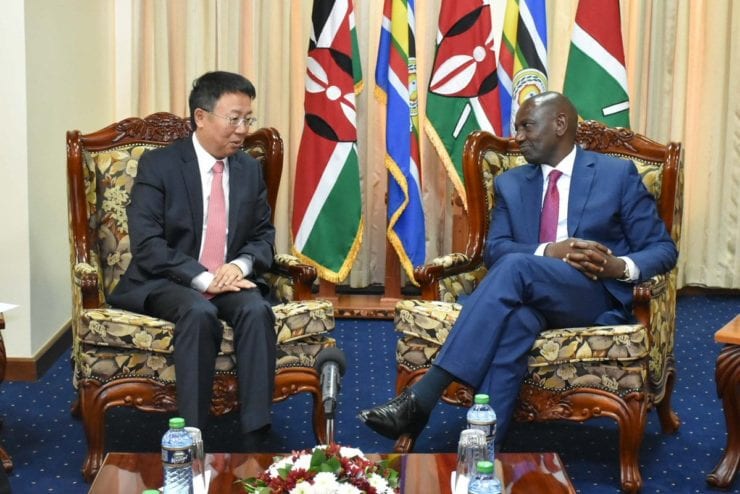 China has warned its citizens living in Kenya against flouting laws in the country.

Chinese Ambassador to Kenya Wu Peng said China is concerned by the rising cases of their citizens being caught in the wrong, adding that stern action would be taken against law offenders.

“Those found flouting the laws of the land would not only be punished by Kenya but also will face our own internal measures as China,” he said.

”Our citizens must respect the rule of law in Kenya. They should do the right thing and get permits and licenses where necessary.”

The envoy spoke in a meeting with Deputy President William Ruto at his office in Karen, Nairobi on Thursday.

The warning comes just days after four Chinese contractors were reported to have assaulted a Kenya National Highways Authority (KeNHA) officer on the Loichangamatak – Lodwar road in Turkana County.

The four were arraigned in court but were set free after the charges were allegedly dropped.

On Monday, Interior CS fred Matiang’i ordered the immediate deportation of all foreigners engaging in the gambling business without the required permits.

Mr Peng pointed out that China is keen on strengthening ties with Kenya, hence, would not tolerate any form of law breaking by its citizens.

“If Kenyans have concerns about the Chinese, let us know, we must follow the order of the locals,” he said, adding that Chinese nationals should not do the work that can be done by Kenyans.

The Deputy President said he did not expect the Chinese to engage in activities, such as small businesses, that most Kenyans draw their livelihoods from.

“Kenya is run by the rule of law. We, therefore, expect the Chinese to adhere to them, and where there is lack of clarity, seek guidance from authorities,” added Dr. Ruto.

”China and Kenya share a common development and transformation vision, which is anchored on the Strategic Comprehensive Cooperation Partnership agreement that was signed in 2016.

”This agreement has yielded positive results and has seen high level exchanges between the two countries and cooperation in infrastructure, manpower development, research, ICT, among others,” he added.

The Deputy President asked the business community in Kenya to diversify their trade so as to bridge the negative balance of trade with China.

”Our focus is to enhance market access to China and more foreign direct investments from China to balance the trade,” he noted.