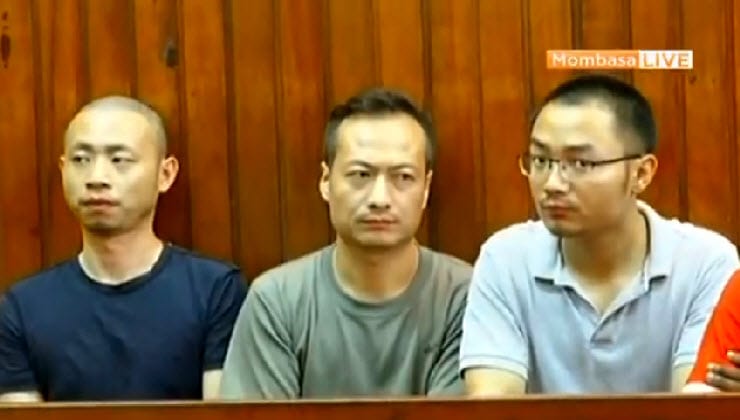 Three Chinese nationals charged with three counts of offering a bribe in order to influence an ongoing criminal investigation were on Friday denied bond.

In his ruling, Mombasa Chief Magistrate Julius Nang’ea termed the accused a flight risk since they had no fixed abode in Kenya.

He further noted that if the three are dismissed by their employer, it will be hard to trace them to answer to charges before court.

The three; Li Gen, Li Xiaowu and Sun Xin who have been in remand at Shimo la Tewa will now be expected in court again in December 10, 2018 for the pre-trial conference.

The ruling comes after a successful petition by the prosecution who told the court of the trio’s potential to interfere with witnesses if released on bail/bond.

The court heard that SGR is a matter of immense national interest and therefore all the people of Kenya are affected by the offences allegedly committed.

It is alleged that on November 22, 2018, at the Standard Gauge Railway (SGR) terminus in Mombasa, the three employees of China Roads and Bridge Corporation (CRBC), gave Investigating Officer Andrew Warui and his team a bribe of Ksh.500,000 so as to tilt the investigations in their favour.

On the second count, they were charged with bribing Investigating Officer Warui and his team with Ksh.200,000 on November 23 in an attempt to influence the outcome of the investigations.

The accused persons have since denied all charges.