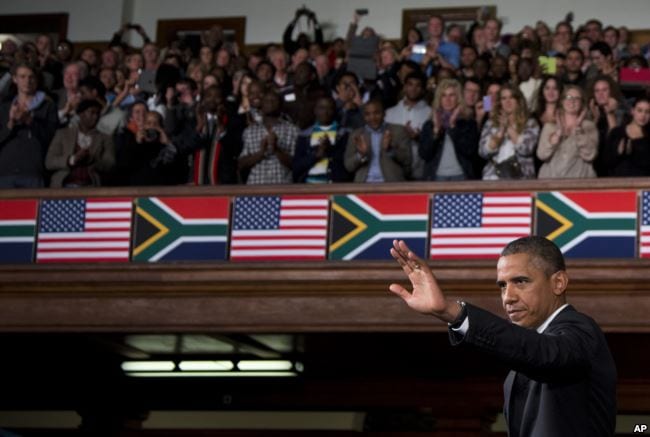 University officials praised the powerful leader for his contributions to engineering and for what they called his world vision, but critics question the move.

China-Africa scholar David Monyae, who directs the Center for Africa-China Studies at the University of Johannesburg, was part of the academic group that presented the degree to Xi’s ambassador to South Africa on Thursday.

Monyae said the faculty Senate debated at length before voting to bestow the honor, and came up with three reasons for the decision.

“One, it has to do with the advancement that has been made, or continuously being made, in China. That is, lifting 800 million people from poverty, something Africa is grappling with,” he told VOA.

“And No. 3, I think, it has to do with the manner in which China is handling issues of development.”

Does the Chinese leader — who last year scrapped term limits, essentially allowing him to govern for life — deserve the honor? His government has also faced criticism for exploiting African governments with crippling loans, and for allegedly abusing workers in Africa.

William Gumede, chairman of the Democracy Works Foundation in Johannesburg, said this degree could give the Chinese leader a boost he may not deserve.

“So this, I guess, would be almost an affirmation of the Chinese president, of his role in Africa. And the Chinese Communist Party can go back to the Chinese people and say, ‘Look, no, we are valued in Africa.’ So, I think there is going to be a whole lot of political capital expounded on this degree.”

Monyae said the faculty Senate was well aware of these issues. He noted this is not the first time the university has made a controversial choice in granting such an honor. President Barack Obama received one in 2013.

“When President Obama was given the honorary degree, issues of drone killings over Afghanistan were raised,” Monyae said.

“These issues were raised as well, as far as China was concerned; however, members of the Senate thought that as it stands, President Xi Jinping deserves the honorary degree.”

Monyae noted that the school also holds some leverage. If the faculty decides that Xi or his government has taken a wrong step or crossed an ethical line, the university wields the power to strip him of the honor, Monyae said.

Africa-China analyst Cobus van Staden, who works at the University of the Witwatersrand, said it’s clear to him who stands to benefit from this honor — and it’s not Xi.

“I think the University of Johannesburg benefits, in the sense that they have in the past really positioned themselves as having official relationships with China.

“So, I think it places them on a more prominent position in China, and I assume it would also open up some collaboration opportunities for them in China.”