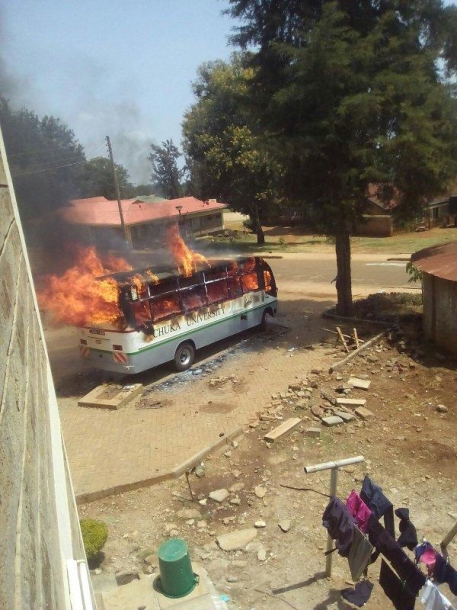 Chuka University in Tharaka-Nithi County has been closed indefinitely after students staged a protest over the disputed students elections held on the 29th of last month.

Anti-riot police arrested 18 students who were found looting shops at the nearby Ndagani Market, forcing other businesses to close.

The students also set ablaze one of their College Buses and broke the windows of several hostels, claiming the elections that were conducted by the Chuka University Student Council were not fair and transparent.

The mayhem reportedly erupted after Kennedy Waringa, one of the chairmanship aspirants in the University Student Council elections, contested the outcome claiming there was lack of transparency.

Following the unrest, the varsity’s administration ordered the indefinite closure of the campus and instructed all students to vacate the premises before Monday afternoon.

In October, a similar incident was witnessed at the Technical University of Mombasa where students went on rampage over deregistration of students, a move they termed as an academic injustice.

A number of learners were injured in a confrontation with police officers and county government officials, with two vehicles being set on fire.

Chuka University Vice-Chancellor Erastus Njoka declined to comment on the matter saying the university would remain closed until further notice.

He has however said that the administration will investigate how the elections were conducted.