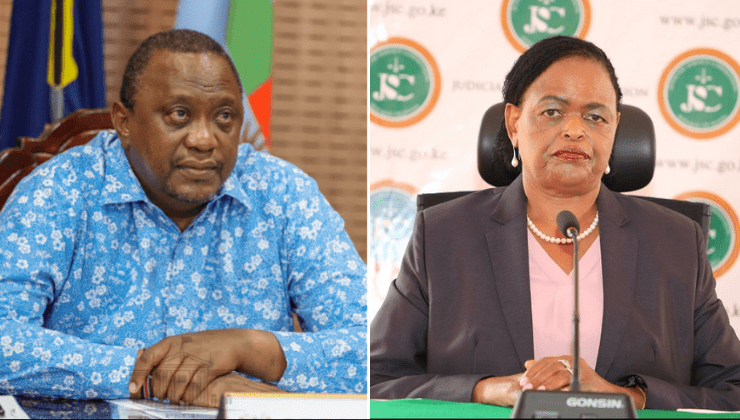 The Chief Justice, in a statement released on Friday evening, pointed out that there is dire need for the 6 judges as the backlog of cases is increasing.

CJ Koome said she is aware that many people have questioned her role in the appointment process, which she distanced herself from saying she played no part in it.

She stated that the process was undertaken two years ago and that upon forwarding the names to President Kenyatta, the CJ and the JSC became functus officio (ceased to have any role).

“I am aware that on 11th January 2014 the JSC recommended the appointment of 25 nominees as Judges, and on 27th June 2014 the President initially appointed 11 of them and subsequently appointed the remaining 14,” she stated.

“We call upon H.E. the President to similarly appoint the remaining 6 Judges because the Judiciary is still in dire need as the backlog of cases is increasing. We should find a lasting solution so that moving forward, this kind of delay and misunderstanding will be a thing of the past.”

CJ Koome further added: “Respect for the rule of law and the independence of the Judiciary is guaranteed under the Constitution. No person or authority is allowed to direct the JSC or the Judiciary in the execution of their mandate.”

President Uhuru Kenyatta on Friday presided over the swearing-in of the recently gazetted 34 judges at State House, Nairobi, telling them to serve in their new respective offices with dedication.

The Head of State had on Thursday appointed the judges who were recommended by the Judicial Service Commission (JSC) more than two years ago, but in a shocking twist, appointed 34 and rejected six judges from the 41 who had been nominated.