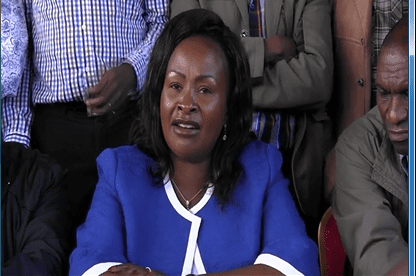 The Court of Appeal has upheld the High Court ruling on Wavinya Ndeti’s nomination to vie for the Machakos gubernatorial seat.

In the ruling, the three-Judge bench consisting of Judges Erastus Githinji, Hannah Okwengu and Jamilla Mohammed ruled that the appeal by a Member of the County Assembly (MCA) challenging Wavinya’s candidature lacks merit.

Further, the Judges indicated that Justice George Odunga properly considered the law in his judgment.

On Wednesday, June 21, the High Court sitting in Nairobi overturned an Independent Electoral and Boundaries Commission (IEBC) Tribunal ruling barring her from running for the Machakos top seat.

An IEBC Tribunal, led by Chairman Wafula Chebukati, had ruled that Wavinya committed an electoral offence by being a member of two political parties at the same time and, therefore, nullifying her candidature.

Justice George Odunga, however, ruled that the IEBC Tribunal had no powers to nullify the decision by the Political Parties Disputes Tribunal that cleared Wavinya to vie for the Machakos governor seat on a Wiper Party ticket.