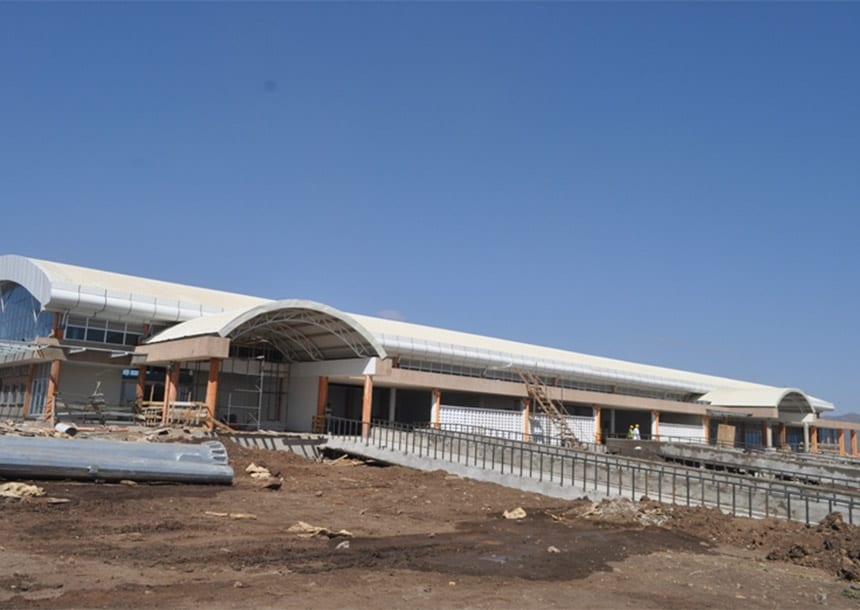 Sitting on a roadside boulder at the edge of Kenya’s Isiolo airport, six young men engage in a friendly argument over what speed an airplane reaches on takeoff.

As they debate the numbers, there is one thing they agree on: the new international airport has brought opportunities they never imagined in this once sleepy town in northern Kenya.

Previously struggling to find work, some of the men are now employed as loaders at the sand and ballast vending sites; others have jobs in construction.

But while those men have the airport to thank for their livelihoods, herder Hassan Halake sees it as a threat to his.

Over the past few years, he said, the town of Isiolo has been spreading outward onto the land he uses for grazing his cattle, as people and companies are drawn by the opportunities the airport offers.

Halake said he and other herders looking for pasture are forced to retreat further into the rangelands, where they find themselves facing off against developers and clashing with farmers from rival tribes.

“People come with security officers and tell us the land we are grazing has been bought and so we must move out. But our local leaders tell us we are on community land,” said Halake, a father of five.

“I do not know what to believe anymore.”

Opened in 2017, Isiolo airport sits on about 260 hectares (640 acres) of land, making it the fourth-largest airport in Kenya.

Paul Mello, a community elder and former member of the Isiolo County Assembly, said that more than 200 families were displaced during the airport’s development.

“Some of the (residents) were not even issued with an eviction notice. They just woke up in the morning and were told to leave the place they had known as home all their lives.”

Isiolo county governor Mohamed Kuti told the Thomson Reuters Foundation that his office was working with the criminal investigations department to establish exactly how many people were evicted and whether they were given sufficient notice.

The clamour for land in and around Isiolo began as early as 2008, when the government announced Isiolo would be turned into a resort city as part of the country’s development plan, Kenya Vision 2030, said Lokeyok Longopaye, a farmer from Muguru na Nyori village.

“Before, no one seemed interested in Isiolo,” he said.

“But when construction of the airport began, people started coming to settle here. As they grew in numbers tensions over land have also escalated.”

Along with the airport, authorities announced the construction of luxury hotels, amusement parks and golf courses, as well as new water and sewage facilities.

At the same time, other big development projects are eating up more land around the town as part of the new Lamu Port-South Sudan-Ethiopia Transport (LAPSSET) Corridor, said Odenda Lumumba, head of the Kenya Land Alliance, an advocacy network.

The $25 billion project to improve Kenya’s links with its neighbors includes a new highway, and a planned oil pipeline and mega-dam.

“These development projects … are interfering with the free-range grazing lifestyle most pastoralists prefer and have been practicing for years,” said Lumumba.

Farmers and land rights advocates said the shrinking of available grazing land around Isiolo only fuels ongoing conflicts between various tribes that go back generations, as each lays historical claim to the land bordering the county.

The airport itself straddles the border of Isiolo county, with its terminal in Isiolo, on land owned by the Borana tribe, and its runway in Meru County, which has led to disputes over issues like naming rights and the sharing of business licenses, according to local news reports.

“It is all about land tenure,” said Lumumba.

“Until the people are issued with title deeds to show they are the genuine owners of land, these conflicts will continue.”

The lack of documentation also makes families vulnerable to being scammed by developers, said local leader Mello, as the skyrocketing value of land in the area around the airport triggers a rush to buy and build.

Mello said some developers are taking advantage of the area’s high illiteracy rates and reliance on customary land tenure and bribing public officials to get title deeds to land that belongs to locals.

“Most of the locals are illiterate and so they do not understand the value of a title deed. This is why they are being cheated of their land rights,” he said.

Kuti, the county governor, denied allegations that officials are accepting bribes in exchange for title deeds.

“I have not received reports of bribery over land ownership. If there are any, we will arrest and charge both the giver and receiver of corruption,” he told the Thomson Reuters Foundation.

To reduce conflicts over land, Kuti said the county government has begun the process of registering land currently held under customary tenure.

“The interests of locals … will be given first priority,” he said.

But for now, Halake the herder said he fears Isiolo’s booming growth will force him to keep searching for land on which he can feed his animals.

“I cannot fight the government and people with money because they are very powerful,” he said.

“My only hope is to keep moving to find pasture for my livestock, hoping they will not follow me.”