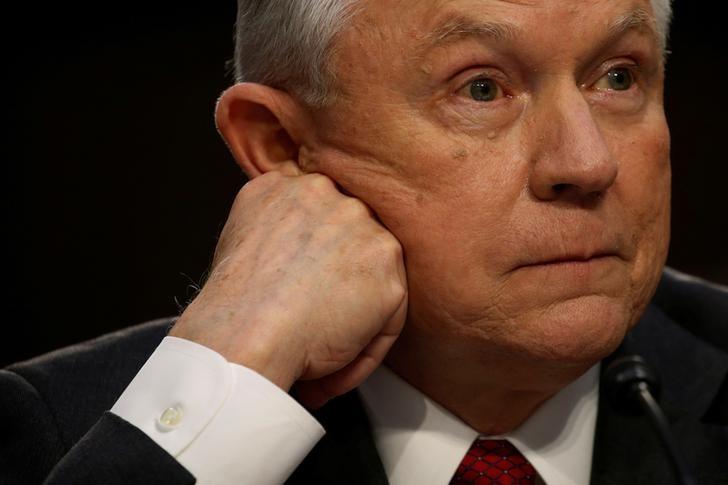 We stand confronted – as former Senator Bob Dole said after seeing ex-Presidents Ford, Carter, and Nixon standing together at the funeral of the Egyptian leader Anwar Sadat – with Hear no Evil, Speak no Evil, and Evil.

Hear no evil was represented at Tuesday’s hearing of the Senate intelligence committee by Attorney General Jefferson Beauregard Sessions III. He said “I don’t recall” and “I don’t remember” so often that it sounded like a highlight reel from the Watergate hearings.

Speak no evil was played by Republican members of the committee, who gave a free pass to Sessions’ protestations that he knew nothing substantive about Russian meddling in the 2016 elections. In fact, no senator of either party had the temerity to ask about his recent offer to resign, made directly to President Trump, for reasons on which we can only speculate.

Evil starred the Russians for attacking American democracy. Sessions, by his own account, knows nothing about Moscow’s alleged intervention in the 2016 presidential race.  He is willfully seeing no evil, he seemed to suggest, because he has recused himself from the whole Russian affair. This decision, in his view, prevents him from being informed about the investigation but not from recommending the dismissal of James Comey, the former FBI director who was leading it until Trump fired him.

Sessions led off by indignantly denouncing the “appalling and detestable lie” that he himself had colluded with the Russian attack. No one has accused him of such criminal conduct.

For good measure, he again insisted that he himself did not have contact with the Russians. That is not the whole truth. He fuzzed over his two meetings with the Russian ambassador Sergei Kislyak, who has a face that is hard to forget. Sessions had failed to disclose these meetings in written testimony submitted at his confirmation hearings.

Senator Joe Manchin of West Virginia asked whether Sessions knew if any members of the Trump administration had met with Russian officials. How about retired Lt. General Michael Flynn, inquired Manchin. After all, there’s that famous picture of Flynn, the former national security adviser, dining with a certain V. Putin. Everyone in Washington knows that then Acting Attorney General Sally Yates warned the White House in December that Flynn’s continuing contacts with Russians left him vulnerable to blackmail.

Everyone, it seems, save Sessions. “I don’t recall,” the attorney general said, for the umpteenth time. Sessions’ seemingly selective amnesia was too much for Senator Ron Wyden of Oregon. “We are talking about an attack on our democratic institutions, and stonewalling of any kind is unacceptable.”The word “stonewall” itself harks back to Watergate. That was Richard Nixon’s advice to his former attorney general and campaign manager John N. Mitchell as the FBI closed in on the Oval Office.

“I am not stonewalling,” Sessions shot back to Senator Wyden. “I am following the historic policies of the Department of Justice.” Sessions was actually following a sheaf of memoranda from the Reagan administration’s Justice Department on the question of executive privilege, which are historic only in the sense that they are 30 years old.

Then came questions over the president’s decision to dismiss Comey, an act construed as a potential obstruction of justice since Comey was investigating the possibility that members of Team Trump aided or abetted Team Putin’s attack on the 2016 election.

First, Sessions said that he and his deputy, Rod Rosenstein, had discussed removing Comey as far back as early February. Second, Sessions insisted that firing the FBI director was justified because of the way Comey announced his decision to close the investigation into Hillary Clinton’s e-mails in July. He so advised the president.

This is strange for two reasons. Sessions wholeheartedly supported Comey’s conduct back then. It’s on tape. And secondly, Trump has said his mind was made up to fire Comey because of his handling of the Russia investigation, no matter what Sessions and Rosenstein advised. That’s on tape too.

Sessions was a member of the Senate five short months ago. He called the members of the intelligence committee “colleagues.” But collegiality and comity were in short supply Tuesday.

Things got tense when Senator Martin Heinrich accused Sessions of “impeding this investigation.” They practically exploded when California Senator Kamala Harris received a flurry of non-answers to direct questions about whether any Trump officials met with Russians – which the record reflects they did. It seems like only yesterday that Trump himself was laughing it up with the Russian foreign minister and the Russian ambassador in the Oval Office. Sessions batted away almost everything Harris threw at him.

This was, in short, no way to run a hearing. Sessions asked to appear in public before the Senate intelligence committee, which at present is the only panel in Congress doing a credible job investigating what the Kremlin may have done to roll out the red carpet for the present occupant of 1600 Pennsylvania Avenue. But the attorney general had little intelligence to offer. He concealed more than he revealed, hiding behind the veil of executive privilege – a privilege only the president can invoke. His testimony was in essence one long memory lapse interrupted by protestation of his own probity.

The Jesuits teach us that there are two kinds of ignorance in this world: Invincible and vincible. Invincible ignorance consists of mysteries we’ll never know, because it’s a fallen world and God works in mysterious ways. Vincible ignorance is comprised of all the things you ought to know but you don’t want to know, because they are too hard to handle. The attorney general’s testimony was an object lesson in the latter. We may see its like again in the course of this investigation. Let’s hope it’s not any time soon.