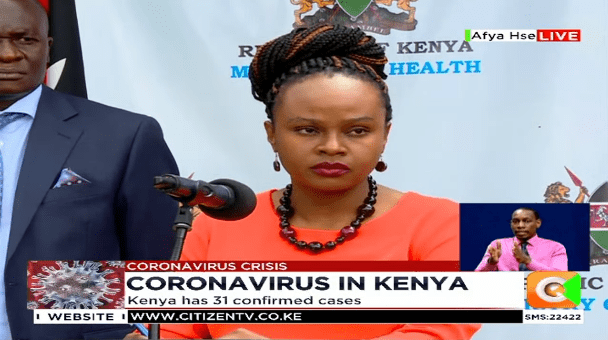 As coronavirus cases in Kenya continue to rise, the government has now raised a red flag on Kilifi County which it says is emerging as a hot spot for the coronavirus disease (COVID-19).

As of Thursday, March 26, the number of COVID-19 cases in Kenya stood at 31 with the patients spreading out in five counties; Nairobi, Kajiado, Mombasa, Kilifi and Kwale.

However, Ministry of Health, Chief Administrative Secretary (CAS), Dr. Mercy Mwangangi on Thursday said medical teams in the country are in consultation on how to handle the situation in Kilifi County where two new patients were confirmed to have tested positive on Thursday.

“As we speak, there are consultations going on, on how our teams are going  to handle Kilifi and other areas that are emerging as hot spots… I therefore urge people at the Coast and Kilifi in particular to observe social distancing with determination,” said Dr. Mwangangi.

While the government is yet to issue official numbers on the patients who have tested positive in Kilifi County, the most notable case is that of Kilifi Deputy Governor Gideon Saburi.

The deputy governor, who has become a subject of public condemnation, is assumed to have expanded the county’s infection chain after he declined to self isolate himself despite returning from Germany; one of the coronavirus-hit countries.

Oblivious of the risk he was posing, Saburi went ahead to attend several public gatherings and even interacted with county officials including his boss, Governor Amason Kingi, who was forced to self-quarantine following the interaction with his deputy.

At least 15 police officers in Kilifi were later directed to self quarantine after it emerged they might have been exposed to the virus in a chain of infection revolving around the deputy governor.

The government says some 1,029 people are believed to have come into contact with the 31 patients who have so far tested positive for the coronavirus in Kenya.

Out of the 1,029 close contacts 123 of them have been discharged while the remaining 906 individuals are being monitored by medical teams in the country.