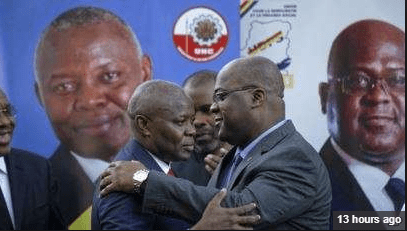 The December 23 elections in the Democratic Republic of Congo are the country’s most important in more than a decade. After delaying a new poll for two years, longtime President Joseph Kabila is stepping aside. Two main candidates are vying to replace him, one is his handpicked successor, the other an opposition leader.

After two decades under the Kabila family, Congolese voters face a stark choice when they go to the polls: Continuity, or change?

Kabila is stepping down two years after his mandate expired. His departure from the top job has opened the door to a flood of 21 presidential aspirants and thousands of people jockeying for lower offices.

But in this crowd, only a handful of names stand out. Little-known former interior minister Emmanuel Ramazani Shadary is Kabila’s choice to become Congo’s next president — and he is campaigning heavily on that relationship.

“I was chosen as candidate for the presidential election by President Joseph Kabila,” he told a crowd at a campaign rally.

But Shadary faces stiff competition from a fractured but passionate opposition, including from the son of the late longtime opposition leader.

Felix Tshisekedi, who is widely seen as the front runner, entered the race late, after the opposition chose another man as their coalition candidate.

That coalition candidate is confident voters will back him, said businessman Martin Fayulu. However, an October opinion poll conducted by international and local think tanks only gave him about eight percent of the vote.

But, he said he’s not sure this election will give him that chance. And on this point, the divided opposition sings in the same key: they believe this poll will not be free, fair or transparent.

An area of particular concern is the electronic voting machines that opposition figures have, repeatedly, described as “rigging machines.”

Adding to that, the government has refused any foreign assistance to hold this poll, saying they’ll do it all themselves, without foreign interference.

Fayulu, who said he will refuse to use a voting machine and will insist on a paper ballot, added that the elections have been a mess from the start.

“The elections, you know, the organization is the worst organization,” he said. “I’ve never seen a country organizing elections and doing what is being done here in this county. Starting from the electoral register. It was a disaster.”

Shadary’s camp disputes these claims, and says they are confident the poll will be up to standard.

Andre-Alain Atundu, a spokesman for the ruling coalition and a close associate of Shadary’s, said he thinks continuity is important and that it will happen, no matter who wins.

“If it’s Mr. Shadary, he’s saying, ‘I’ll continue with the spirit of progress advanced by Mr. Kabila.’ He’s honest,” said Atundu. ‘The other will take advantage of what Mr. Kabila has left. … It’s a question of honesty. And every next president will want to continue what Mr. Kabila has had the opportunity to achieve.”

As the poll nears, election paraphernalia is everywhere in the capital, with Shadary’s impassive face beaming from billboards and promising economic development, security and better infrastructure.

Tshisekedi and Fayulu are far less visible on posters, but Kinshasa is an opposition stronghold, where their rallies are packed and where historically they have performed well.

The visual clutter of faces and names and promises has almost become invisible to residents of the bustling capital, who declined to stop and talk about politics when asked.

But as December 23 edges ever closer, everyone is wondering: In which direction will Congo go?