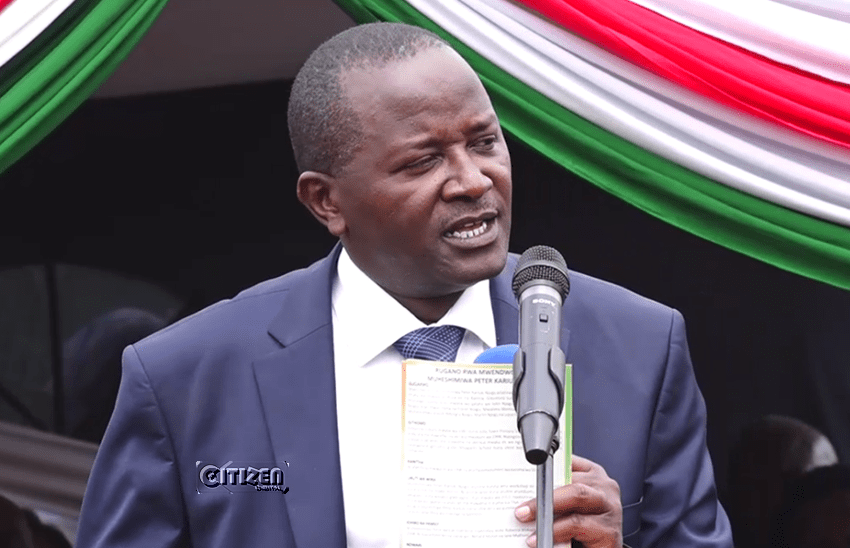 Jubilee MPs have claimed that Coalition for Reforms and Democracy (CORD) is behind the remarks by nominated Senator Paul Njoroge on Deputy President William Ruto’s 2022 presidential bid.

Njoroge had on Sunday claimed that Ruto is not assured of an automatic support from Mt Kenya region, sentiments that border views expressed by Kiambu Governor William Kabogo two weeks ago.

The Governor had claimed that Ruto ought to work hard to win the Mt Kenya region and not expect automatic backing.

Speaking in Murang’a on Tuesday, Kigumo MP Jamleck Kamau said that Njoroge’s utterances were misplaced adding that it amounted to betrayal of the party.

“We took Mr Njoroge and gave him a nomination into Senate and he should know that he does not speak for Jubilee or TNA,” said Kamau.

“Our Deputy President has stood with us and even vowed to support our President in 2017. The only way to reciprocate such a gesture is to assure him of our support in 2022.”

The MP further warned that the Senator may have been sent by opponents of Jubilee to destabilize the party saying they would not succeed in their quest.

This comes just hours after residents of Naivasha held protests to express their displeasure with Njoroge’s utterances.

In a statement to newsrooms, State House Senior Director of Public Communications Munyori Buku said that President Uhuru Kenyatta has been categorical that Jubilee would back Ruto in 2022 presidential elections in a plan to extend the party’s reign to 20 years.

Murang’a Senator Kembi Gitura also hit out at the Senator saying he had no authority to speak on behalf of the people of Mt Kenya.

He said that as a nominated senator, Mr Njoroge could not speak on behalf of the people saying he should contemplate running for office in the next polls instead of relying on nominations.

Gatundu South MP Moses Kuria stated that the 2017 and 2022 elections plans are already in place adding that the region should adhere to President Kenyatta’s call to support Ruto in 2022.