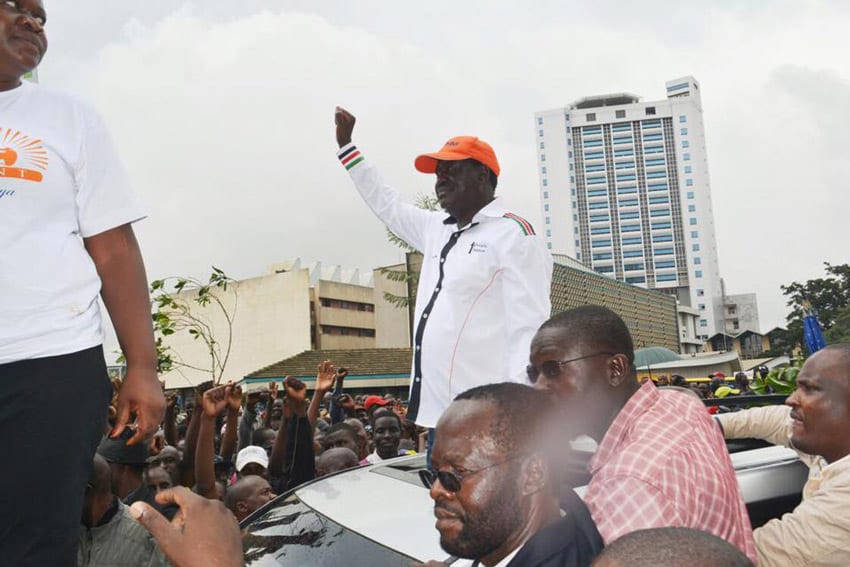 The Coalition for Reforms and Democracy has announced  that it will not relent in its push for the removal of the Independent Electoral and Boundaries Commission (IEBC) commissioners from office.

In a press briefing held on Tuesday, CORD principals Raila Odinga, Kalonzo Musyoka and Moses Wetangula noted that they are within their rights to push for the disbandment of IEBC, blaming the police and Jubilee government for turning Monday’s anti-IEBC march chaotic.

“Yesterday (Monday), a lawful attempt by CORD to have a peaceful engagement with IEBC on the basis of Articles 37 and 38 of the Constitution was violently brought down through police brutality. Many of our people were hurt,” they stated.

“Jubilee has brought back the imperial presidency and state terror as a means of control and running an autocratic administration. We are not impressed. We condemn the state for going back to the dark days of one party state, social injustice and political oppression.”

The leaders stated that they will hold a major march next Tuesday and follow it up with subsequent assemblies every Monday at IEBC’s offices at Anniversary Towers and all other major towns in the country until the commissioners resign.

“All meetings outside Nairobi will be held at the IEBC offices with emphasis on Nairobi, Mombasa, Garissa, Machakos, Nakuru, Eldoret, Kakamega, Kisii, Busia, Bungoma, Narok, Lodwar, Meru, Isiolo, Nyeri and Kitale,” they noted.

The leaders further accused Jubilee of snubbing their request for talks on the best way forward for the country saying they will now resort to using the voice of the people to express their grievances.

“All sovereign power belongs to the people of Kenya. We, the People, are sovereign. If the state makes an attempt to establish or run the government otherwise than in compliance with the Constitution, we, the people, shall resist,” stated CORD.

“If the administration chooses not to listen to us and run government by unconstitutional means, we, the people, shall exercise our sovereign power directly in accordance with the Constitution of Kenya.”

IEBC also came under sharp criticism during the press briefing with the leaders blaming the commission chair Isaack Hassan of cowing to apparent threats of prosecution from the government.

“The referendum and Okoa Kenya Bill proposed amendments to the Constitution to address the legal and institutional reforms that would be necessary to resolve controversy in the electoral law, the independence and impartiality of the police, the judiciary and IEBC.”

“We know that Jubilee has been living in mortal fear of a referendum. The administration has used the threat of prosecution of the Chairman of IEBC and his colleagues to secure decisions to be made in their favour by IEBC.”

CORD accused IEBC of sabotaging their push for Okoa Kenya referendum drive saying the claims that the coalition did not meet the one million signatures was untrue.

“Those who are howling at us for not using legal and constitutional means to remove the IEBC forget that CORD was using the mechanism provided by Article 257 of the Constitution of Kenya.”

“By a stroke of the pen IEBC frustrated a valid constitutional process by falsely claiming that CORD did not attain the threshold of one million signatures of registered voters.”

Addressing Ukambani leaders on Tuesday, President Kenyatta said he would support people’s right to assembly but would not condone political actions that may lead to violence, destruction of property and loss of life.

On Monday, CORD’s attempts to storm IEBC offices in an apparent move to evict IEBC commissioners but their efforts were thwarted by police who lobbed teargas to disperse the protesters.