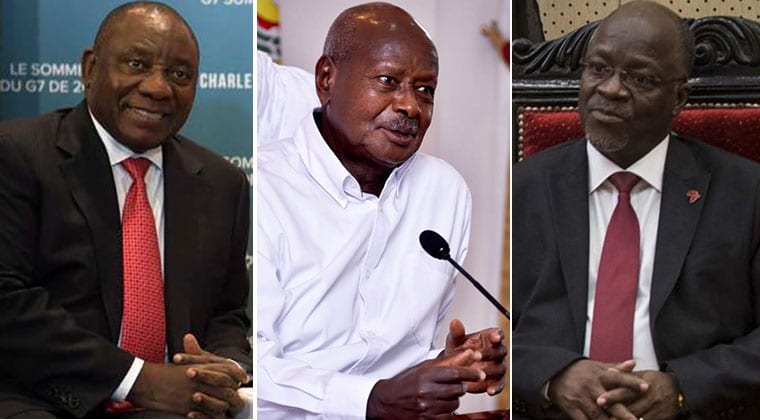 As Burundi enters a period of mourning for President Pierre Nkurunziza, who died Monday, his leadership during the coronavirus pandemic is being scrutinized.

Nkurunziza’s official cause of death was listed as “cardiac arrest.”

However, many have speculated that he contracted COVID-19 following reports that his wife was flown to Kenya to be treated for the disease.

As the virus spread across Africa, Nkurunziza resisted calls for a lockdown.

He kept businesses open, allowed mass gatherings, such as sporting events, and held an election on May 20.

He expelled a WHO representative and three public health experts coordinating the virus response, and his administration insisted the country would be spared because of its Christian faith.

“Burundi is an exception, because it is a country that has put God first,” said the president’s spokesperson, Jean-Claude Karerwa Ndenzako.

Across the continent, the coronavirus crisis is exposing different leadership styles, with some African leaders embracing the role of crisis leader, while others stay silent or even spread misleading information.

He says the countries where leaders were proactive in instituting testing and contact tracing will be better off.

“You’ll find the countries with a high number of cases, like Senegal, Ghana, South Africa, are some of those countries that are very good at doing testing,” Nyenswah said on VOA’s Straight Talk Africa.

“Testing, contact tracing, isolation, social distancing, hand-washing, are the tools that we have right now and are the tools to control COVID-19. And so, countries that are doing high levels of testing are on a path to continue back.”

South African President Cyril Ramaphosa is one leader winning high marks for taking early action in the country’s fight against the coronavirus.

As a tough lockdown eased this month, Ramaphosa urged South Africans to remain vigilant as the government conducts aggressive tracing and testing.

The country accounts for about one-third of all tests on the continent, and its factories have stepped in to produce about one million masks per day.

“We are calling on all South Africans to wear a face mask whenever you leave home,” Ramaphosa said.

“Our clothing and textile industry, including small businesses, are gearing up to produce these masks on a mass scale.”

But not all African leaders have followed that playbook.

Tanzanian President John Magufuli has taken a different tack. Instead of embracing testing, he has criticized public health officials and the international community.

Magufuli, who used to teach chemistry, has been skeptical of the virus and has echoed conspiracy theories, saying its severity is being exaggerated by “imperialists.”

On live television, he announced the country’s national laboratory had inflated coronavirus numbers. He even said the virus cannot survive in the bodies of those who pray.

Tanzania has also been criticized for its secrecy in reporting cases. The cause of death for the country’s justice minister, who passed away at age 74, has been cloaked in mystery.

The U.S. Embassy in Tanzania has warned that the risk of contracting COVID-19 in the country remains high and said the government has not released aggregate numbers in over a month.

Nyenswah said ignoring the problem is not a strategy. “Denial and resistance that the disease does not exist will not help the country,” he said.

“You cannot hide an outbreak, and that infectious disease will expose you when people begin to die. It will expose the health system and expose the country.”

Many African leaders are learning from the past. In Uganda, President Yuweri Museveni said scientists had learned from public health crises like AIDS and Ebola.

The key, he said, is to determine the most common means of transmission and block it.

On May 7, Uganda mandated that people wear masks in public.

“You have a mask because it is riding on the droplets or … the breath of the infected person. If you block it, then you block it. That’s why I would like you to put on the masks all the time,” he said in an interview with NBS-TV, a VOA affiliate in Kampala.

Museveni has also advocated a cautious approach to reopening public transportation and schools. He said his administration’s priority is to save lives and will worry about the economy later.

“There’s no way you can compare so that many people should die so we make money? No. The money can wait. … So really, there’s no comparison. … You don’t compare the incomparable. With life, we go for life first and then the economy will come later,” he said.

Nigerian President Muhamadu Buhari has probably been touched more personally by the coronavirus than any head of state. On April 17, his chief of staff died from the disease.

Like other leaders, he enforced a lockdown but began easing it on May 4 in key areas, including the capital, Abuja, and the largest city, Lagos.

Africa’s most populous country has the third-highest number of coronavirus cases, with just over 11,000.

On June 1, Nigeria’s COVID-19 Presidential Task Force announced it was beginning Phase 2 of the reopening, which includes churches, mosques and hotels.

This, despite some health experts warning that the country has not yet hit its peak and risks a jump in cases.

Boss Mustapha, chairman of the task force, said the reopening does not signal that the country is letting down its guard.

“COVID-19 is still a fight for life,” he said when announcing the reopening. “Our advancement to Phase 2 does not mean that COVID-19 has ended, as Nigeria has not reached the peak of confirmed cases.”

This story originated in the Africa Division, with contributions from a one-on-one interview in collaboration with NBS-TV, a VOA affiliate in Kampala, and English-to-Africa’s ‘Straight Talk Africa’ TV show host, Shaka Ssali.