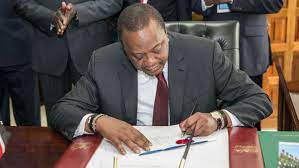 The Executive Order No. 1 of 2020, dated January 14, 2020, placing the country’s judiciary under the control of Kenya’s executive branch, led by President Uhuru Kenyatta, has been declared unlawful by High Court Judge James Aaron Makau.

” A declaration be and is HEREBY issued that the Executive Order Number 1 of 2020, issued on 14″, January, 2020, (Revised) purporting to organize the government and set out Judiciary and Its Tribunals, Commissions and Independent offices as institutions under the functions of ministries and government departments and other constitutional bodies are unconstitutional, null and void and contrary to the Constitution of Kenya, 2010.” the ruling reads.

President Kenyatta signed the executive order on May 11, 2020, moving the Judiciary, Judicial Service Commission, and 39 other ministries, commissions, and independent offices under the Attorney-General and various cabinet secretaries.

The Law Society of Kenya (LSK) then filed a lawsuit, claiming that the directive was unlawful and infringed on the independence of the commissions.

Worried that the independence of these tribunals, commissions, and independent offices would be jeopardized, as well as their budgets and finances, the law society asked the court to issue an order halting the President’s plan.

The Attorney General objected to the interim ruling, claiming that the disputed executive order “enjoys the presumption of validity and constitutionality.”

Furthermore, the AG claimed that there was no evidence that granting the interim order would ‘enhance constitutional values… in the Bill of Rights.’

Judge James Makau said he needed to establish a number of things before granting the interim order, including that the law society’s lawsuit had a reasonable chance of success and that the society would suffer prejudice if it was not granted.