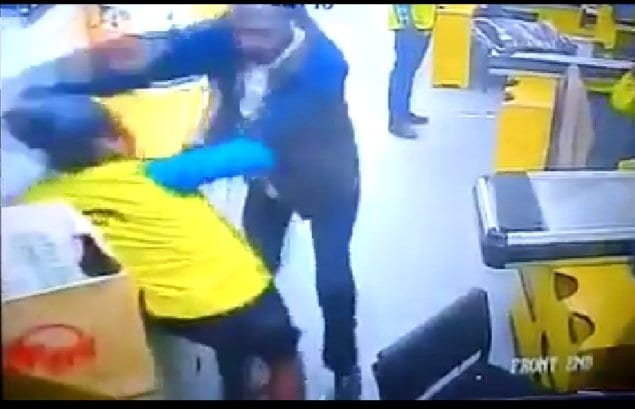 Ahmed Keruti Taraiya, the man captured on video beating up a female cashier at an Eastmatt Supermarket outlet, was on Monday arraigned before a Kajiado court where he pleaded not guilty to assault charges.

Taraiya was detained for 11 days pending hearing of the matter after the prosecution successfully opposed his release on bail.

Appearing before Chief Magistrate Susan Shitubi, the 30-year-old pleaded with the court to release him on favourable bail terms saying he is the sole breadwinner of his family.

“I don’t have a wife at home but I am taking care of my child as well as my mother who is staying in the village and they solely depend on me,” he said.

“Therefore I promise not to interfere with the investigations or issue threats to the victim, so that I can be able to attend this case while taking care of my family.”

The Office of the Director of Public Prosecutions (ODPP) however opposed the bail application claiming the suspect has been threatening Sarah Atieno, the teller he is accused of assaulting.

The ODPP, led by Solomon Njeru, further argued that Taraiya might interfere with witnesses and is also a flight risk as he had allegedly attempted crossing over to Tanzania.

The victim is presently under witness protection with the mention of the case set for December 6, 2019.

Director of Public Prosecutions (DPP) Noordin Haji on Saturday ordered the arrest of Ibrahim after the video – in which he is seen slapping Ms. Atieno several times – went viral and sparked public uproar.

Ms. Atieno, at some point in the short clip, holds up her hands against her face to protect herself but Ibrahim hits her again and pulls her by the hair before hitting the back of her head.

She then grabs his hand in a bid to make him stop but he pulls her off her chair, hits her again and she falls to the floor.

The assault goes on for a while longer before a man, presumably also an employee at the establishment, jumps over a chair and restrains Ibrahim.

Eastmatt later issued a statement acknowledging that indeed both Ms. Atieno and Ibrahim are their employees, further adding that the victim of assault was “getting the appropriate medical attention” while the suspect was suspended.