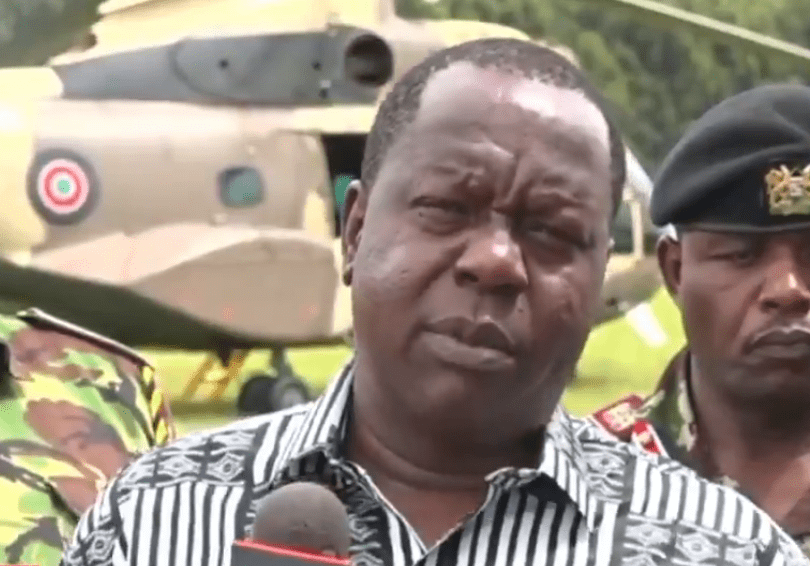 Speaking to Citizen TV, the Interior CS said they were headed to Kapenguria Referral Hospital to meet West Pokot leaders as well as victims of Saturday’s landslides that left about 40 people dead and many others injured.

CS Matiang’i, who was also accompanied by Rift Valley Regional Commissioner George Natembeya, added that the chopper left Nairobi at 8:30am but they were advised by pilots and experts to land in Eldoret.

“It looks like it’s very difficult for the helicopters we’re using to fly into Kapenguria because it’s still raining, it’s very foggy, and visibility is not very clear. Because of safety and security considerations, we have been advised to divert to Eldoret,” said the CS.

Dr. Matiang’i further added that, depending on the advisory they receive during the course of the day, they will either spend the night in Eldoret and fly into Kapenguria on Tuesday morning or fly back to Nairobi until the weather clears.

The CS also sought to reassure the West Pokot County leadership that the National Government is committed to addressing the challenges the people are facing due to the mudslides, adding that affected families will also be supported.

“We have sent some relief supply ahead. I know that, because the roads are very difficult to navigate at this time, some of the food and items like blankets may be late to arrive… but we dispatched some food both from Eldoret and Nairobi,” he added.

Devolution CS Wamalwa, on his part, stated that among the items that have since been dispatched to the affected areas are food and non-food items such as blankets, mattresses, tents and mosquito nets.

“As we speak, all our PSs (Principal Secretaries) and our national teams are on the ground working with the county teams and Red Cross and all agencies around the clock to support the affected families,” he added.

IG Mutyambai stated that all resources in the security department including trucks had been deployed to the area to aid in moving affected families.

Thirty-eight people have since been reported dead following landslides in Nyarkulian and Parua villages in West Pokot County.