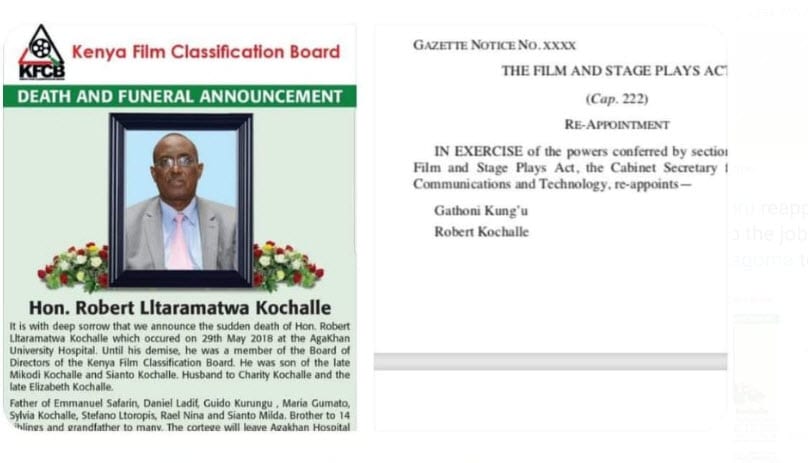 Information Cabinet Secretary Joe Mucheru has revoked the appointment of the late Robert Kochalle and replaced him with his widow Charity Kochalle.

In a gazette notice dated October 16, 2019, Robert Kochalle, who died in May last year, had been re-appointed to serve as a member of the Kenya Film Classification Board for a period of three years.

This led to an uproar as Kenyans online expressed outrage in CS Mucheru’s announcement.

The CS has since released another gazette notice that rectified the error and replaced Kochalle with his widow alongside two other appointees; Gathoni Kung’u and Nereah Aluoch Okanga.

The board’s Chief Executive Officer Ezekiel Mutua however termed the notice as an error adding that Kenyans were blowing the mistake out of proportion.

According to Mutua, the error might have been occasioned by an administrative mix-up following the transfer of KFCB from one government ministry to another.

Taking to Twitter, Mutua said: “Small issue being blown out of proportion. The Board presented the notification to the Ministry for replacement and inadvertently he was reappointed. It was not CS Mucheru’s mistake at all as the conversation started when KFCB was under the Ministry of Sports and Culture.”