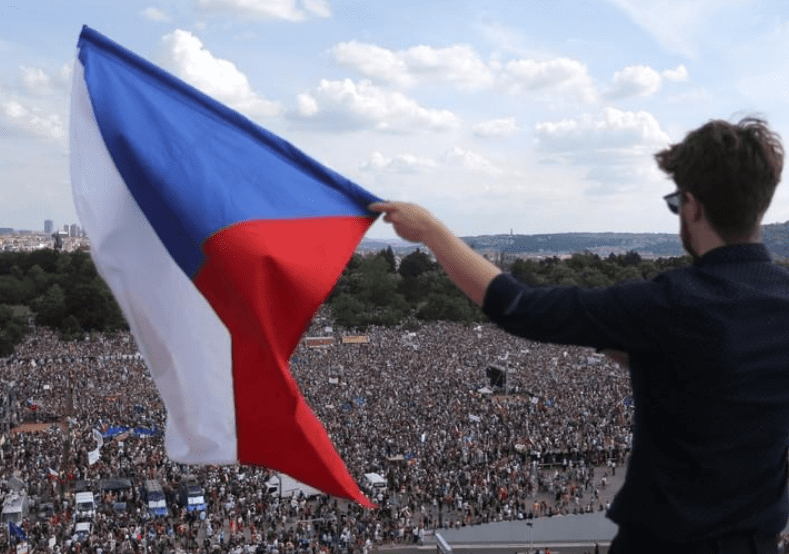 Czechs turned out in their thousands on Sunday in Prague to call for the ousting of Prime Minister Andrej Babis, in the biggest show of public discontent since the 1989 Velvet Revolution which overthrew Communism.

The rally in Letna park was the culmination of a series of demonstrations in recent weeks against Babis, who has faced investigations over alleged fraud and conflicts of interest.

Organizers said they believed that about 250,000 people had attended Sunday’s rally, from all around the country, but this figure could not be verified.

Some carried banners saying “Resign”, “We’ve had enough”, and others waved Czech or EU flags. Many families brought children to the protest, which was peaceful so far as were other recent protests against both Babis and his justice minister.

Police proposed in April that Babis, a billionaire businessman-turned-politician sometimes likened to U.S. President Donald Trump, should be formally charged for fraud in tapping a European Union subsidy a decade ago to build a hotel and conference center outside Prague. He denies any wrongdoing.

The appointment of a new justice minister just after the police announcement prompted rallies by demonstrators suspicious that Babis was trying to influence proceedings. Babis has also vigorously denied that claim.

Filip Rubas, who joined protests in 1989 against the then communist regime, said he turned out on Sunday to send a message to politicians that they will be held accountable.

“We think that our leaders need to be reminded very strongly that they do not own our country, that they are not above the law (or constitution) and that there are still enough caring people who are not brainwashed by hateful propaganda,” said Rubas, 50.

He traveled to the rally with his wife and a group of friends from Brno, the country’s second city, 200km from Prague.

Sunday’s protest was organized by civic group Million Moments for Democracy, founded by students. Politicians were not invited to speak at the rally which began at around 16.30 (1430 GMT).

Babis suffered another setback from leaked preliminary results of an audit by the European Commission, which determined he is in conflict of interest as the beneficiary of trust funds where he had transferred his business valued at $3.7 billion by Forbes.

Babis insists the audit is wrong and this would be proven in the final conclusions, expected late this year or early in 2020.

Babis has said people have the right to protest but has firmly refused to step down. His populist ANO movement remains the most popular party, although its support has dipped slightly in the past two months to 27.5%, according to a poll by Kantar agency released on June 9.

Babis also has enough backing in parliament, where a no-confidence vote planned for the next week is likely to fail.