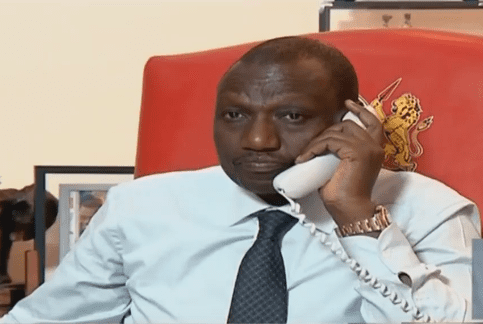 Detectives from the Directorate of Criminal Investigations (DCI) are currently at the Harambee House Annex office of Deputy President William Ruto as part of probe into the fake Ksh.39 billion military arms deal.

A source at the DCI who spoke to Citizen Digital intimated that the sleuths are set to question all staff that work under the DP; including the security guards.

However, of utmost importance to the detectives, as our source indicated, are the employees who were present on the date former Sports Cabinet Secretary Rashid Echesa, who has since been arrested and arraigned, and the foreigners involved in the deal allegedly visited the office.

According to the source, some of the questions the DCI will be looking to find answers to include: “Who let them pass through and why? Who led them into the boardroom where negotiations took place? Did they have an appointment?” etc.

DP Ruto has in the past few days been roped into the scandal which saw former CS Echesa, one of his key allies, spend Valentine’s weekend in police custody before being arraigned at the Milimani Law Courts on Monday.

Echesa and his co-accused are said to have attempted to obtain a total of Ksh.39,544,200,000 from Kozlowski Stanley Bruno by falsely pretending that they would award him a tender by the State Department to supply military equipment.

According to court documents, the four on February 13, 2020 – at Harambee House Annex, which houses the office of the DP – uttered a flase agreement for supply, delivery, installation, commissioning and maintenance of integrated and security surveillance system between the Kenyan government and Eco Advanced Technologies.

DP Ruto, in a tweet on Sunday, seemingly confirmed that the “scammers” were indeed at the Harambee House Annex, however saying that they stayed for only 23 minutes.

“ODP does not procure for any ministry/department. Question: other than 23min in Annex, for months, which government offices involved in the ‘tender’ did the scammers visit? Did they access DOD? Who facilitated? Who did they meet? Get the truth. Forget the sponsored NONSENSE in media,” wrote the DP.