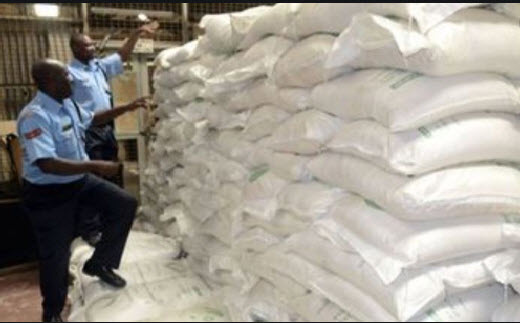 Detectives from the Directorate of Criminal Investigations (DCI) in Changamwe on Saturday launched investigations after close to 5000 bags of sugar alleged to be contaminated with traces of mercury were stolen at Bollore go down in Changamwe, Mombasa County.

While confirming the incident, area OCPD Daudi Loronyokwe said that it is suspected that the contaminated sugar might have been stolen three weeks ago which advised police to invite the DCI into the matter.

The area commander further added that 300 sacks of safe sugar were also stolen during the incident.

Seven people linked to the incident have since been arrested.

Police have also launched a manhunt for the security guard who was at the go down and who is reported to have gone into hiding after the incident.

This comes amid an ongoing crackdown on contraband sugar by the government after traces of mercury and copper were discovered last year.