‘Dead beat dad? Not me’ CJ Maraga says after woman claims he fathered her child 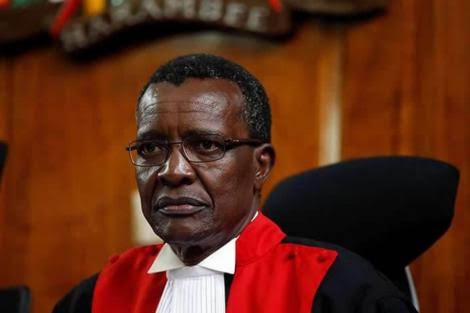 Chief Justice David Maraga has dismissed claims by a woman that he fathered her child and later deserted them.

This follows an incident where a woman caused a stir at the Milimani law court when she appeared wailing accusing the Chief Justice of not taking care of their six year-old-daughter who was a product of an extra-marital affair.

She was also demanding over Ksh.160,000 from the CJ in child support payment.

Led by his lawyer Danstan Omar, CJ Maraga said that the allegations and the papers presented before the court are generated and should not be relied upon.

According to Omar, the case has not been filed before the court saying that the woman only presented the papers in court for assessment but was unable to pay the filing fee as required.

“That birth certificate is generated, it is not a document to be relied on,” Omar said.

The lawyer further said that they will write to the DPP, DCI and all relevant agents to investigate the issue.

“If this is aimed at assassinating the character of the Chief Justice, it is our position we shall be calling on the DPP and all relevant arms of government to get to the root course of this fraud,’’ he added.

Omar wants the mastermind of the petition unmasked saying that the President of the Supreme Court is not worried about the allegations made by the woman.

While questioning the authenticity of the birth certificate, another Maraga lawyer Anita Masakhi said that they are not sure if the sure exist adding that the name of the mother does not exist before the registrar of birth.

“There is no registrar known as Shamwata in the whole country nor has there been an officer with the name N.P Otieno,” said Anita Masakhi.