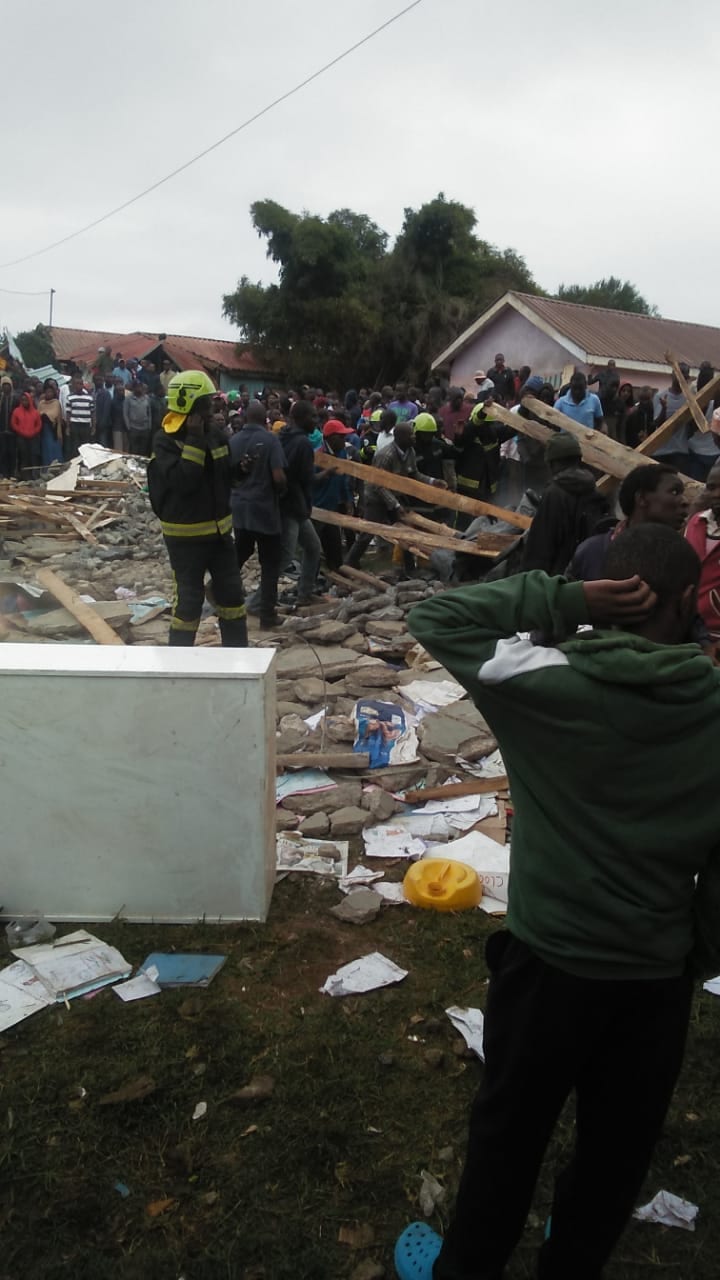 Eight pupils died at Precious Talent School after the walls of their classrooms caved in on them on Monday morning.

Authorities had earlier placed the death toll at seven, however, police on Monday evening confirmed to Citizen TV that a total of eight bodies had been recovered; one of which was yet to be identified.

The fatalities include seven girls and one boy.

Speaking at the Kenyatta National Hospital after visiting the injured pupils, Deputy President William Ruto said 60 out of the 64 pupils who had been injured had been cleared and discharged from hospital.

The DP said he had been informed that procedures were being concluded on the remaining four.

“I am glad doctors are doing their best to ensure the young ones are back in good health soon,” said Ruto on Monday afternoon.

The government, through Spokesperson Col. Cyrus Oguna, earlier announced that it will cater for all the medical expenses of the affected students.

The tragic incident occurred at around 6.50am after a two-storey building housing junior and upper primary classes collapsed in what would expose a construction that has since been described as a death trap for the young and innocent children.

After visiting the school, Education CS Prof. George Magoha said there was malpractice in the construction of the ill-fated two-storey structure and that the incident would have been avoided.

Prof. Magoha said owners of the school constructed an additional floor to the single-storey building without seeking approval, placing the pupils’ lives in danger.

“I have been to all the other classrooms and in my most humble opinion they are stable. So if a spade must be called a spade ahead of the investigations, you notice that somebody went and build another storey on top of the temporary structure. If you go ahead and do so without anybody’s approval I think we should be fair to each other including being fair to government,” said Magoha.

“If the owners of this school had remained with a single-storey building this accident should not have occurred. If we were working in an ideal situation, they should have come to ask for approval from the ministry which I can guarantee you they would not have gotten.”

The top floor of the building was housing the junior primary pupils but the most affected learners are those in Class 6, Class 7 and Class 8 on the ground floor.

The school has since been closed for a week to allow for investigations into the incident before further action is taken.

Meanwhile, the government has ordered an audit of infrastructure in all schools across the country following the  Precious Talent School incident.