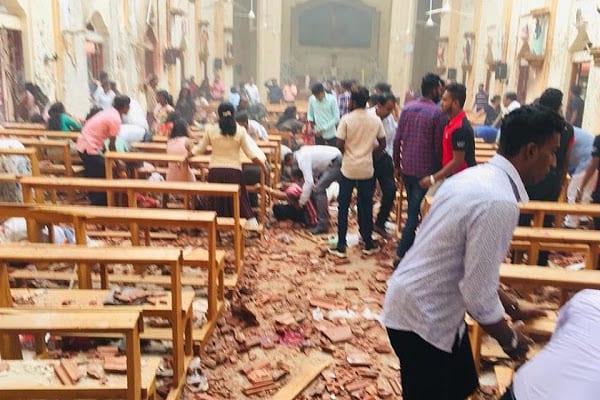 At least 207 people were killed and hundreds more wounded in a series of bomb blasts that hit luxury hotels and churches across Sri Lanka on Easter Sunday, leaving the entire country in a state of lock-down.

The first wave of attacks struck at the heart of the country’s minority Christian community during busy Easter services at churches in the cities of Colombo, Negombo and Batticaloa on Sunday morning.

The violence punctures a decade of relative peace in the country following the end of its civil war in 2009 — where attacks were common during the 25-year struggle. Sri Lanka has since turned itself into a popular tourist destination, winning the title of best place in the world to visit in 2019 by travel guide publisher Lonely Planet.

In a statement, the Shangri-La hotel in Colombo said that the hotel’s Table One cafe was hit just after 9 a.m local time. The hotel is popular with foreign tourists and the country’s business community.

A seventh and eighth blast, at a hotel in front of the Dehiwala Zoo in Dehiwala-Mount Lavinia and at a private house in Mahawila Gardens, in Dematagoda, occurred Sunday afternoon.

Here’s the full list of blast sites reported so far:

Sri Lanka’s Minister of Economic Reforms and Public Distribution Harsha de Silva said on Twitter that “close to 30 foreigners” were killed on Sunday. In the capital, Colombo, at least 20 foreigners are among the dead, according to hospital Director General Anil Jasinghe. Hospitals have opened their doors to scores of victims.

Two Turkish citizens and one Dutch national are among the dead. The British High Commissioner to Sri Lanka, James Dauris, said some British citizens were also “caught in the blast.”

Seven people are under arrest following the attacks, De Silva wrote after an emergency meeting with defense officials.

There was however no immediate claim of responsibility. Sri Lankan security officials said police and security services immediately rushed to all affected areas and sealed off the churches and hotels..

Father Edmond Tillekeratne, social communications director for the Archdiocese of Colombo, spoke to CNN from St. Sebastian’s Church, one of the locations targeted.

He said that the blast took place after Easter Mass, and there were about 30 bodies lying in the area of the church.

Tillekeratne said three priests had been celebrating the mass at the time of the blast. Two of them were badly injured by flying glass and debris, and one was only lightly injured because he was behind the altar.

He estimated that more than a thousand people had come to the church for Easter Sunday “because it is a special day.” Many came from villages, he added.

He described the ground as covered in rubble and shattered glass.

“You can see pieces of flesh thrown all over the walls and on the sanctuary and even outside of the church,” he added.
Curfew imposed

He said on Twitter that all emergency steps had been taken and that the group would issue a statement on the blasts.
Sri Lanka’s Prime Minister Ranil Wickremesinghe condemned the blasts on Twitter, calling on Sri Lankans to “remain united and strong.”

President Maithripala Sirisena also spoke out following the attacks. “I have given instructions to take very stern action against the persons who are responsible for this conspiracy,” he said.

Leave has been canceled for all police in Sri Lanka.

“Horrible scenes, I saw many body parts strewn all over,” de Silva said after visiting the Kochchikade church and Shangri-La Hotel in Colombo. “We took multiple casualties to hospital. Hopefully saved many lives.”

De Silva confirmed that foreigners were among the casualties and said rescue operations were underway, adding that emergency crews were operating in “full force.”

Sri Lanka’s minority Christian community appeared to be the main target of Sunday’s attack. Christianity is a minority religion in Sri Lanka, accounting for less than 10% of the total population of 21.4 million.

According to census data, 70.2% of Sri Lankans identify as Buddhist, 12% Hindu, 9.7% Muslim, and 7.4% Christian. It is estimated that 82% of Sri Lankan Christians are Roman Catholic.

Sunday’s attacks risk upsetting the country’s fragile post-war peace. Tensions between the majority Sinhalese and the Tamil minority led to a 25-year insurgency between the Tamil Tigers, classified by the US and others as a terrorist organization, and government forces.

More than 70,000 people died in the fighting, which ended when Sri Lankan forces defeated the Tamil Tigers in 2009.

In recent years, the country has witnessed a surge in ultra-nationalist Buddhism led by the Bodu Bala Sena, the country’s most powerful Buddhist organization, which has pledged to defend the religion.